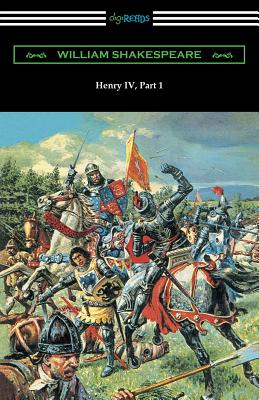 The second play in William Shakespeare's tetralogy of plays which also includes "Richard II", "Henry IV, Part 2", and "Henry V", "Henry IV, Part 1" is believed to have been written no later than 1597. A history play, the drama concerns the unquiet reign of Henry Bolingbroke. Following the usurpation of the throne, Henry IV is plagued with guilt over his role in the imprisonment and death of King Richard II. In order to resolve himself of this internal conflict Henry IV leads a crusade to the Holy Land. Meanwhile the King is troubled by his son's behavior. The future King Henry V, the Prince of Wales, nicknamed Prince Hal, has forsaken the Royal Court in favor of spending his time in taverns with lowlifes, which brings into question his royal worthiness by the fellow nobleman of the royal court. Prince Hal is particularly captivated by Sir John Falstaff, a charismatic old drunk. The action of the play revolves around three groups. First there is the King and his council. Secondly there is a group of rebels comprised principally of the Percys and the Mortimers. Thirdly there is the Prince and his companions, who provide a comic relief from the serious action of the play. Ultimately the Prince abandons his carousing ways and assumes his royal duty as the conflict between the King and the rebels comes to a head at the Battle of Shrewsbury. This edition is printed on premium acid-free paper, includes a preface and annotations by Henry N. Hudson, and an introduction by Charles Harold Herford.