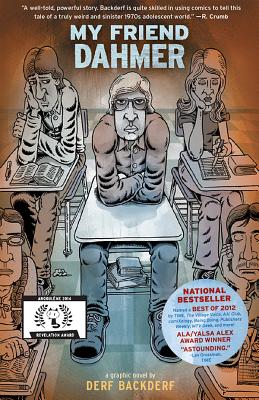 You only think you know this story. In 1991, Jeffrey Dahmer—the most notorious serial killer since Jack the Ripper—seared himself into the American consciousness. To the public, Dahmer was a monster who committed unthinkable atrocities. To Derf Backderf, "Jeff" was a much more complex figure: a high school friend with whom he had shared classrooms, hallways, and car rides. In My Friend Dahmer, a haunting and original graphic novel, writer-artist Backderf creates a surprisingly sympathetic portrait of a disturbed young man struggling against the morbid urges emanating from the deep recesses of his psyche—a shy kid, a teenage alcoholic, and a goofball who never quite fit in with his classmates. With profound insight, what emerges is a Jeffrey Dahmer that few ever really knew, and one readers will never forget.

Find teaching guides for My Friend Dahmer and other titles at abramsbooks.com/resources.

Derf Backderf is the bestselling, award-winning author of My Friend Dahmer and Trashed. He lives in Cleveland, Ohio.

A well-told, powerful story. Backderf is quite skilled in using comics to tell this tale of a truly weird and sinister 1970s adolescent world.
— R. Crumb

The tone is sympathetic and enraged (‘Where were the damn adults?’), while not excusing or making the story unduly fascinating. Backderf’s writing is impeccably honest in not exculpating his own misdeeds . . . and quietly horrifying. A small, dark classic.
— Publisher's Weekly

One of the best graphic novels I've read this year.
— USA Today's PopCandy

One of the most thought-provoking comics released in a long time.
— Slate.com

Carefully researched and sourced with ample back matter, Backderf’s tragic chronicle of what shouldn’t have been is a real butt-kicker for educators and youth counselors as well as peers of other potential Dahmers. Highly recommended for professionals as well as true crime readers.
— Library Journal

This isn't a cautionary tale. It's insight shared insight arriving too late to save Dahmer's victims, let alone Jeff himself, but perhaps soon enough to remind both teens and their caretakers that questioning peculiar behavior might be a better tack than ignoring or exploiting it.
— School Library Journal

Fortunately, cartoonist Derf Backderf isn't one to avoid the troubling, even terrifying, truths that lurk in the dark recesses of that notorious serial killer's early life and modern American life itself.
— Foreword Reviews

A powerful, unsettling use of the graphic medium to share a profoundly disturbing story . . . An exemplary demonstration of the transformative possibilities of graphic narrative.
— Kirkus Reviews

Masterful . . . a rich tale full of complexity and sensitivity . . . There's something about Dahmer's life and crimes that seems almost crafted for treatment in the murky world of comix. Yet it's empathy and nuance, not gore, that put My Friend Dahmer alongside Alison Bechdel's Fun Home and David Small's Stitches in the annals of illustrated literature.
— Cleveland Plain Dealer

A new classic of the graphic novel genre . . . A moving book that qualifies as one of the great graphic novels, a work of art.
— Creative Loafing

Anyone who opens My Friend Dahmer to satisfy a morbid curiosity, and likewise anyone who expects to find no more than a cynical publishing venture here, is bound for disappointment. It is a horrifying read, yes, not so much for what it reveals about the sad early (and inevitably terrible) life of Jeffrey Dahmer, but because of what it reveals about the bland emotional landscape of Middle America, in this vision a petri dish for psychoses in many degrees and forms. Backderf’s odd stylization, with figures that look like organic robots, is a perfect vehicle for this conception. His graphic approach is grotesque, droll, and it rags on reality as masses of kids knew and still know it. Lots of books exist about the agonies and cruelty of the adolescent high school experience, but few so compellingly bring us straight into that soulless environment, showing the ways it can shelter, allow to burgeon, and, at the same time, be completely blind to real madness. It wasn’t easy reading this book, but I’m glad I did.
— David Small

My Friend Dahmer is a brilliant graphic novel and surely ranks among the very best of the form. Like Alison Bechdel’s Fun Home, the book plumbs a dark autobiographical mystery, trying in retrospect to understand actions and motivations to piece together the makings of a tragedy. Like Charles Burns’s Black Hole, it’s a starkly etched portrait of the horror of high school in the 1970s. Comparisons aside, My Friend Dahmer is entirely original, boldly and beautifully drawn, and full of nuance and complexity and even a strange tenderness. Out of the sordid and grotesque details of Dahmer’s life, Derf has fashioned a moving and complex literary work of art.
— Dan Chaon

Just when you think you know all there is to know about Jeffrey Dahmer— one of the most notorious criminals of the past century—along comes My Friend Dahmer, which adds significantly to our understanding of this rare form of psychopathology. The graphic novel format helps the reader appreciate the adolescent mind-set of Dahmer’s high school classmates. Although none of those who grew up with Dahmer expected to hear what they learned on July 22, 1991, when he was caught, no one was really surprised, either. This unique book allows the reader to listen in on the fascinating reminiscences of those who watched the developing mind of a future serial killer.
— Louis B. Schlesinger, PhD, Professor of Forensic Psychology

It’d be so easy to pigeonhole and think that the reason you can’t stop reading My Friend Dahmer is because it offers a voyeuristic peek inside the monster. And it does. But as it turns its self-aware eye on the boy who doesn’t belong, the real magic trick is how equally hateful and sad you feel for the monster himself. This one’s still haunting me.
— Brad Meltzer

As someone who walked the halls of Revere High School with both Backderf and Dahmer and was there from the beginning, I am astounded by the accuracy and truthfulness of this portrait. I know of no other work that so clearly shows the teenage days of an American monster, long before the rest of the world heard of him. Mesmerizing.
— Mike Kukral, PhD, Revere High School class of 1978, Professor of Geography, Rose-Hulman Institute of Technology

If you want to read a heavy story about a disturbing teenager, My Friend Dahmer will certainly quench your dark little desires. But this book is about a lot of other things that matter much, much more: the institutionalized weirdness of the suburban seventies, what it means to be friends with someone you don’t really like, a cogent explanation as to why terrible things happen, and a means for feeling sympathy toward those who don’t seem to deserve it.
— Chuck Klosterman