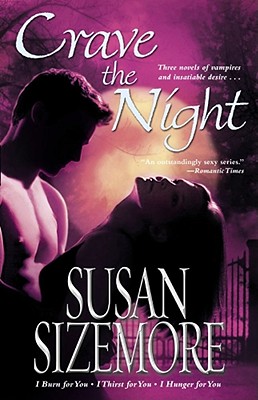 In her steamy vampire romances, acclaimed author Susan Sizemore pits vampires against mortals, destiny against desire....By popular demand, all three novels are now available in this paperback collectible.
I Burn for You
Battling the dark hollows of his soul, vampire Alec Reynard undergoes secret medical treatments that allow him to bear daylight. Living a double life as a bodyguard, he must also battle his powerful attraction to Domini Lancer, a mere mortal -- and, unbelievably, his soul mate. When danger threatens, he kidnaps Domini to protect her but wonders: will she accept the darkness within him -- or is she a vampire slayer who's cleverly infiltrated his clan?
I Thirst for You
Josephine Elliot knows only that the stranger who appeared out of the dark desert night and took her captive is named Marcus Cage and that he's on the run. A vampire, Marcus is overwhelmed by his thirst for Josephine and instantly recognizes her as his soul mate -- but when she unwittingly betrays him, both are thrust into mortal danger. Can their newfound love survive or is their insatiable desire doomed?
I Hunger for You
Mia Luchese, who comes from a long line of vampire hunters, doesn't know that Colin Foxe broke off their blistering affair because he's a vampire. After she's attacked by evil vamps and Colin rescues her, their real identities must be revealed for them to get to the bottom of the attack. But even a generations-old enmity that should rip them apart cannot break the bond that has their souls hungering for an eternity of ecstasy in each other's arms....