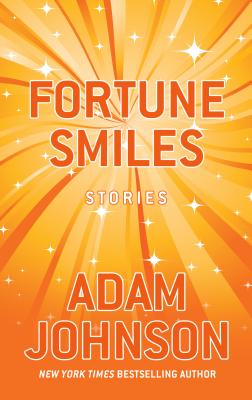 By Adam Johnson
for information about purchasing this book, please contact orders@bookpassage.com

Winner of the Pulitzer Prize for his acclaimed novel about North Korea, "The Orphan Master's Son, " Adam Johnson is one of America's most provocative and powerful authors. Critics have compared him to Kurt Vonnegut, David Mitchell, and George Saunders, but Johnson's new book will only further his reputation as one of our most original writers. Subtly surreal, darkly comic, both hilarious and heartbreaking, "Fortune Smiles" is a major collection of stories that gives voice to the perspectives we don t often hear, while offering something rare in fiction: a new way of looking at the world.
In six masterly stories, Johnson delves deep into love and loss, natural disasters, the influence of technology, and how the political shapes the personal. Nirvana, which won the prestigious "Sunday Times" short story prize, portrays a programmer whose wife has a rare disease finding solace in a digital simulacrum of the president of the United States. In Hurricanes Anonymous first included in the "Best American Short Stories" anthology a young man searches for the mother of his son in a Louisiana devastated by Hurricanes Katrina and Rita. George Orwell Was a Friend of Mine follows a former warden of a Stasi prison in East Germany who vehemently denies his past, even as pieces of it are delivered in packages to his door.And in the unforgettable title story, Johnson returns to his signature subject, North Korea, depicting two defectors from Pyongyang who are trying to adapt to their new lives in Seoul, while one cannot forget the woman he left behind.
Unnerving, riveting, and written with a timeless quality, these stories confirm Johnson as one of America's greatest writers and an indispensable guide to our new century.
Praise for "Fortune Smiles
"
Masterful . . . Each story] is a miniature demonstration of why his remarkable novel "The Orphan Master's Son" won the 2013 Pulitzer Prize for fiction. "The Washington Post"
Entrancing. "O: The Oprah Magazine"
Audacious . . . These six long, fearless stories explore dangerous territories, both personal and political. "San Francisco Chronicle"
Every one of Johnson's stories] carves out its own little corner of weird, indelible humanity. Grade: ] A "Entertainment Weekly"
Johnson] is always perceptive and brave; his lines always sing and strut and sizzle and hush and wash and blaze over the reader. "The New York Times Book Review "(Editors Choice)
Johnson packs more voice in his stories than most authors do in a novel. "Esquire"
A highly literary writer willing to take risk after risk after risk. "The Boston Globe"
Johnson] serves up six sinewy stories that shock and surprise. . . . They re] compulsively readable tales about characters whose lives are largely ignored, undervalued, or simply uncharted. "Elle"
Remarkable . . ."Fortune Smiles"is the best short story collection since"Tenth of December." . . . Johnson is one of America's greatest living writers. "The Huffington Post"
Johnson's stories] will burrow their way into your heart, leaving you shaken but also exhilarated and enriched. . . ."Fortune Smiles" is] worth treasuring. "USA Today "(four stars)
Superb . . . explosive. "The Wall Street Journal.

Adam Johnson is the author of "The Orphan Master s Son, " winner of the Pulitzer Prize in fiction, the Dayton Literary Peace Prize, and the California Book Award, and finalist for the National Book Critics Circle Award. It was named one of the best books of the year by more than a dozen publications, including "The Washington Post, The Wall Street Journal, " the "Los Angeles Times, " and "Entertainment Weekly." Johnson s other awards include a Guggenheim Fellowship, a Whiting Writers Award, a National Endowment for the Arts Fellowship, and a Stegner Fellowship; he was also a finalist for the New York Public Library s Young Lions Award. His previous books are "Emporium, " a short story collection, and the novel "Parasites Like Us." Johnson teaches creative writing at Stanford University and lives in San Francisco with his wife and children."