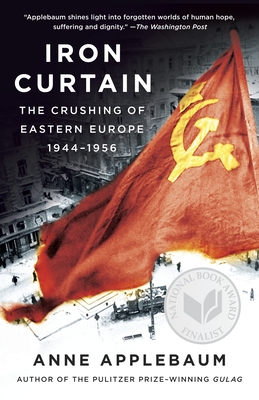 In the much-anticipated follow-up to her Pulitzer Prize-winning Gulag, acclaimed journalist Anne Applebaum delivers a groundbreaking history of how Communism took over Eastern Europe after World War II and transformed in frightening fashion the individuals who came under its sway. Iron Curtain describes how, spurred by Stalin and his secret police, the Communist regimes of Eastern Europe were created and what daily life was like once they were complete. Drawing on newly opened East European archives, interviews, and personal accounts translated for the first time, Applebaum portrays in chilling detail the dilemmas faced by millions of individuals trying to adjust to a way of life that challenged their every belief and took away everything they had accumulated. As a result the Soviet Bloc became a lost civilization, one whose cruelty, paranoia, bizarre morality, and strange aesthetics Applebaum captures in these electrifying pages.

Anne Applebaum is a columnist for The Washington Post and Slate. Her previous book, Gulag, won the Pulitzer Prize for Nonfiction and was a finalist for three other major prizes. Her essays appear in The New York Review of Books, The New Republic, and The Spectator. She is married to Radek Sikorski, the Polish Foreign Minister.

“Applebaum shines light into forgotten worlds of human hope, suffering and dignity. . . . One of the most compelling but also serious works on Europe’s past to appear in recent memory. . . . With extraordinary gifts for bringing distant, often exotic worlds to life, Applebaum tells us that Sovietization was never simply about political institutions or social structures.”
—The Washington Post

“Remarkable . . . a book that reanimates a world that was largely hidden from Western eyes, and that many people who lived and suffered in it would prefer to forget.”
—The New Yorker

“Epic but intimate history . . . [Applebaum] eloquently illuminates the methods by which Stalin’s state imprisoned half the European continent. . . . Applebaum offers us windows into the lives of the men and sometimes women who constructed the police states of Eastern Europe. She gives us a glimpse of those who resisted. But she also gives us a harrowing portrait of the rest—the majority of Eastern Europe’s population, who, having been caught up in the continent’s conflicts time and time again, now found themselves pawns in a global one.”
—The Wall Street Journal

“Illuminating. . . . Human beings, as Ms Applebaum rousingly concludes, do not acquire ‘totalitarian personalities’ with ease. Even when they seem bewitched by the cult of the leader or of the party, appearances can deceive, she writes. When it seems as if they buy into the most absurd propaganda—marching in parades, chanting slogans, singing that the party is always right—the spell can suddenly, unexpectedly, dramatically be broken.”
—The Economist

“A tragically intimate account of the imposition of communism in Central Europe. Here is a world in which political authorities shut down choral singing societies, bird-watching clubs, anything that might nourish an independent social sphere. The story is told both with artistry and scholarship.”
—David Frum, The Daily Beast, Favorite Books of 2012

“A meticulously researched and riveting account of the totalitarian mind-set and its impact on the citizens of East Germany, Poland and Hungary. . . . Even as it documents the consequences of force, fear and intimidation, however, Iron Curtain also provides evidence of resistance and resilience.”
—Minneapolis Star Tribune

“Deeply researched, exciting. . . . A masterful work that will be read profitably by both laymen and scholars. . . . It is the best book on its subject, and will remain so for quite a while.”
—Christian Science Monitor

“Disturbing but fascinating history. . . . With precision in her narration and penetrating analysis, Applebaum has written another masterful account of the brutality of Soviet rule.”
—Publishers Weekly, starred review, Best Book of 2012

“A dark but hopeful chronicle that shows how even humanity’s worst can fracture and fall.”
—Kirkus Reviews, starred review, Best Book of 2012

“Magisterial . . . Anne Applebaum is exceptionally well qualified to tell [this story]. Her deep knowledge of the region, breadth of view and eye for human detail makes this as readable as her last book, on the Gulag.”
—Daily Mail (UK)

“A true masterpiece. . . . Impressive. . . . Applebaum’s description of this remarkable time is everything a good history book should be: brilliantly and comprehensively researched, beautifully and shockingly told, encyclopedic in scope, meticulous in detail. . . . First and foremost of [the book’s achievements] is Applebaum’s ability to take a dense and complex subject, replete with communist acronyms and impenetrable jargon, and make it not only informative but enjoyable—and even occasionally witty.”
—The Telegraph (UK)

“A masterly synthesis in English of recent research by scholars in these countries, and of the range of memoirs by participants and survivors.”
—The Guardian (UK)

“Applebaum’s excellent book tells with sympathy and sensitivity how unlucky Eastern Europe was: to be liberated from the Nazi dictatorship by the only regime that could rival it for inhumanity.”
—The Independent (UK)

“So much effort is spent trying to understand democratization these days, and so little is spent trying to understand the opposite processes. Anne Applebaum corrects that imbalance, explaining how and why societies succumb to totalitarian rule. Iron Curtain is a deeply researched and eloquent description of events which took place not long ago and in places not far away - events which contain many lessons for the present.”
—Fareed Zakaria, author of The Post-American World

“Iron Curtain is an exceptionally important book which effectively challenges many of the myths of the origins of the Cold War. It is wise, perceptive, remarkably objective and brilliantly researched.”
—Antony Beevor, author of Stalingrad and The Second World War

“This dramatic book gives us, for the first time, the testimony of dozens of men and women who found themselves in the middle of one of the most traumatic periods of European history. Anne Applebaum conveys the impact of politics and ideology on individual lives with extraordinary immediacy.”
—Amanda Foreman, author of Georgiana: Duchess of Devonshire and A World on Fire: Britain’s Crucial Role in the American Civil War

“Anne Applebaum’s highly readable book is distinguished by its ability to describe and evoke the personal, human experience of Sovietisation in vivid detail, based on extensive original research and interviews with those who remember.”
—Timothy Garton Ash, author of The Magic Lantern: The Revolution of ‘89 Witnessed in Warsaw, Budapest, Berlin, and Prague