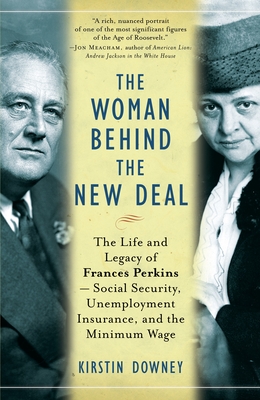 One of Franklin Delano Roosevelt’s closest friends and the first female secretary of labor, Perkins capitalized on the president’s political savvy and popularity to enact most of the Depression-era programs that are today considered essential parts of the country’s social safety network.

Kirstin Downey is a frequent contributor to The Washington Post, where she was a staff writer from 1988 to 2008, winning press association awards for her business and economic reporting. She shared in the 2008 Pulitzer Prize awarded to the Post staff for its coverage of the Virginia Tech shootings. In 2000, she was awarded a Nieman fellowship at Harvard University. She lives in Washington, D.C.

“The book is more than a biography of an extraordinary woman. It is a window to another time through which we are able to observe the birthing pains of reforms we now take for granted. . . . Many passages dealing with the Great Depression, immigration and the impending world war could have been lifted from today’s news." —Charlestown Post and Courier

“The New Deal was a big deal for America — and, as Kirstin Downey shows in this illuminating and sparkling book, Frances Perkins, my predecessor as Labor Secretary, was the moving force behind much of it. Her legacy included Social Security, unemployment insurance, and other initiatives that have improved the lives of generations of Americans. With wit and insight, Downey recounts the accomplishments of this singular woman and invites us to celebrate her life.”  —Robert B. Reich, Professor of Public Policy at the University of California at Berkeley and former U.S. Secretary of Labor

“Kirstin Downey gives Frances Perkins the biography she deserves, the story of a fierce advocate who put people first, a public servant who was actually worthy of the name, and a bracing reminder of what inspired government can do. Perkins ignored the glass ceiling and changed America. This book is a joy!” —Nick Taylor, author of American-Made: The Enduring Legacy of the WPA: When FDR Put the Nation to Work

“For all of her apparent modesty and fierce sense of privacy, Frances Perkins wanted to be known by posterity for her contributions to FDR and his New Deal, particularly Social Security. An investigative reporter, Kirstin Downey has uncovered France Perkins’s extraordinary strengths in shaping and securing the central domestic accomplishments of the New Dealers. Despite continuing impediments, Perkins, a social worker, successfully broke into a man’s world and was a major player for all twelve years of FDR’s administration. Downey deftly links the Progressive movement of the early 1900s with the reforms Perkins helped FDR achieve, particularly in his first two terms. In Downey’s skilled hands, Frances Perkins at last emerges as a pivotal figure in the most transformative twelve years of twentieth century American history.” —Christopher N. Breiseth, President and CEO of The Franklin and Eleanor Roosevelt Institute

“For his presidency to succeed, FDR needed a strong labor secretary to restore jobs and confidence. Perkins was that loyal lieutenant, as well as his unrelenting prod and social conscience.”  —Mary Leonard, Pittsburgh Post-Gazette

“The story of Ms. Perkins turns out to be, in the sympathetic hands of Ms. Downey, a remarkably good read, surprisingly full of dramatic twists despite that motherly hat and low-profile manner.”  —Priscilla Taylor, The Washington Times

“The current economic woes have, among other things, focused attention once again on the New Deal. Books about the economics, the politics and the personalities of the time have surfaced.  Still, as a new book by award-winning business journalist Kirstin Downey suggests, one of the most influential figures in shaping the New Deal turns out to be a name few know today—and turns out to be a woman.  Eight years of research, new documents and interviews with family members were among the many sources Downey drew on for her new and compelling portrait of ‘The Woman Behind the New Deal.’” —Sarah Bagby, NPR

“It’s a provocative title, but Downey convinced me that Fannie Perkins, of Beacon Hill, Worcester, and Mount Holyoke College, was the woman behind the New Deal. Her book could not be more timely.” —Alex Beam, Boston Globe

“Reading the biography of FDR’s Labor Secretary Frances Perkins brings to mind the old saying about how Ginger Rogers had to do everything Fred Astaire did, except backward and in high heels. Perkins, the first female Cabinet member, not only had to do more than her male counterparts to prove herself. . . .  Perkins would have notched a place in history simply by taking the job. But she earned it through a jaw-dropping number of accomplishments. Perkins took a major role in shepherding through Social Security, unemployment insurance, child labor laws and the minimum wage.”  —Michael Hill, Associated Press

“At a time when the United States stands at the brink of another economic meltdown calling for sweeping federal interventions, Downey provides not only a superb rendering of history but also a large dose of inspiration drawn from Perkins’s clearheaded, decisive work with FDR to solve urgent problems diligently and to succeed in the face of what seemed insurmountable odds.”  —Publishers Weekly

“Prize-winning journalist Downey deconstructs the life of a passionate labor advocate who became the nation’s first female Cabinet member. . . . Making excellent use of personal papers and of archival materials that include a 5,000-page oral history, Downey allows Perkins to narrate much of the text, giving new life to this often overlooked historical figure. . . . As a progressive president again takes office in a time of economic crisis, Perkins offers a vital role model.”  —Kirkus Reviews