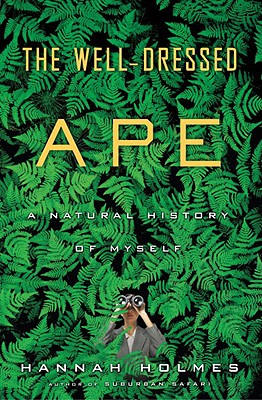 By Hannah Holmes
$25.00
Email or call for price

The well-dressed ape, aka Homo sapiens, is a strange mammal. It mates remarkably often, and with unprecedented affection. With similar enthusiasm, it will eat to the point of undermining its own health–behavior unthinkable in wild animals. The human marks its territory with doors, fences, and plastic flamingos, yet if it’s too isolated it becomes depressed. It thinks of itself as complex, intelligent, and in every way superior to other animals–but is it, really?

With wit, humility, and penetrating insight, science journalist Hannah Holmes casts the inquisitive eye of a trained researcher and reporter on . . . herself. And not just herself, but on our whole species–what Shakespeare called “the paragon of animals.” In this surprising, humorous, and edifying book, Holmes explores how the human animal–the eponymous well-dressed ape–fits into the natural world, even as we humans change that world in both constructive and destructive ways.

Comparing and contrasting the biology and behavior of humans with that of other creatures, Holmes demonstrates our position as an animal among other animals, a product of–and subject to–the same evolutionary processes. And not only are we animals–we are, in some important ways (such as our senses of smell and of vision), pitiably inferior ones. That such an animal came to exist at all is unlikely. That we have survived and prospered is extraordinary.

At the same time, Holmes reveals the ways in which Homo sapiens stands apart from other mammals and, indeed, all other animals. Despite the vast common ground we share with our fellow creatures, there are significant areas in which we are unique. No other animal, as far as we know, shares the human capacity for self-reflective thought or our talent for changing ourselves or our environment in response to natural challenges and opportunities. One result of these extraordinary characteristics is the spread of our species across the entire planet; another, unfortunately, is global warming.

Deftly mixing personal stories and observations with the latest scientific theories and research results, Hannah Holmes has fashioned an engaging and informative field guide to that oddest and yet most fascinating of primates: ourselves.

Hannah Holmes is the author of The Well-Dressed Ape," "Suburban Safari and The Secret Life of Dust. Her writing has appeared in "The New York Times Magazine, Los Angeles Times Magazine, Discover, Outside," and many other publications. She was a frequent contributor on science and nature subjects for the Discovery Channel Online. She lives with her husband and dog in Portland, Maine.

“Filled with scads of peculiar facts and intriguing mysteries, The Well-Dressed Ape mates hard-nosed research with lively, funny wordsmithing to produce a refreshing, original look at our own kind.”—Amy Sutherland, author of What Shamu Taught Me About Life, Love, and Marriage

“Hannah Holmes provides a fantastic synopsis of the human species. The best and the worst, the beautiful and the ugly—even the stinky.”—Mark Norell, chairman and curator, Division of Paleontology, American Museum of Natural History