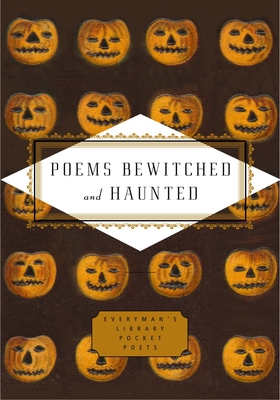 A delightfully ghoulish array of specters and sorceresses, witches and ghosts, hags and apparitions haunt these pages–a literary parade of phantoms and shades to add to the revelry of All Hallow’s Eve.

From Homer to Horace, Pope to Poe, Randall Jarrell to James Merrill, Poems Bewitched and Haunted draws on three thousand years of poetic forays into the supernatural. Ovid conjures the witch Medea, Virgil channels Aeneas’s wife from the afterlife, Baudelaire lays bare the wiles of the incubus, and Emily Dickinson records two souls conversing in a crypt, in poems that call out to be read aloud, whether around the campfire or the Ouija board. From ballads and odes, to spells and chants, to dialogues and incantations, here is a veritable witches’ brew of poems from the spirit world.

JOHN HOLLANDER is the author of more than a dozen books of poetry. His first, A Crackling of Thorns, was chosen by W. H. Auden as the 1958 volume in the Yale Series of Younger Poets. He wrote eight books of criticism, including the award-winning Rhyme’s Reason: A Guide to English Verse and The Work of Poetry, and edited or coedited twenty-two collections, among them The Oxford Anthology of English Literature, American Poetry: The Nineteenth Century, and (with Anthony Hecht, with whom he shared the Bollingen Prize in Poetry in 1983) Jiggery-Pokery: A Compendium of Double Dactyls.

Mr. Hollander attended Columbia and Indiana Universities and was a Junior Fellow of the Society of Fellows of Harvard University. He taught at Connecticut College and Yale, and was a professor of English at Hunter College and the Graduate Center, CUNY. In 1990 he received a MacArthur Fellowship. He died in August 2013.