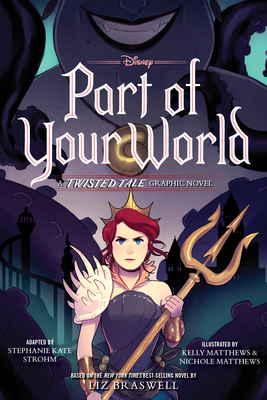 What if Ariel had never defeated Ursula? Discover a new side of The Little Mermaid in this darkly romantic reimagining of the classic Disney film—now available as a graphic novel!

Five years ago, Ariel defied her father, King Triton, and traded her voice for the chance to meet Prince Eric. But when Ursula attacked and defeated Ariel, the sea witch took everything: the little mermaid’s voice, her prince, and her father’s life. Now, Ariel rules as the silent queen of Atlantica, while Ursula, disguised as a beautiful human woman, runs Prince Eric's kingdom on land.

But when Ariel discovers that her father might still be alive, she finds herself returning to a world—and a prince—she never imagined she would see again.

On land, Ariel learns that Ursula has been making the most of her role as princess: plotting, scheming, and waging outright war with neighboring kingdoms. And after Ursula catches wind of Ariel’s resurfacing, she threatens to obliterate both land and sea. Will Ariel be able to overthrow the murderous villain bent on destroying her home—along with the world she once longed to be a part of?

In this adaptation of one of the most popular books in the New York Times best-selling Twisted Tale series, brilliantly adapted by Stephanie Kate Strohm, illustrator duo Kelly and Nichole Matthews breathe new life into this story of power, love, and a mermaid’s quest to reclaim her voice.

Stephanie Kate Strohm is the author of Twelfth Grade Night (Arden High #1); Once Upon a Tide: A Mermaid's Tale; Prince in Disguise; Love à la Mode; It’s Not Me, It’s You; The Date to Save; and That's Not What I Heard. She lives and writes in Los Angeles. You can find her online at www.StephanieKateStrohm.com and on Twitter and Instagram @StephKateStrohm.

Kelly and Nichole Matthews are twin sisters (and totally not four cats in a trench coat, they swear!) who work as a comic art team and live north of the Emerald City with their pet overlords. They’ve worked with Boom! Studios, The Jim Henson Company, Random House Graphic, and Riot Games to create comics for all ages and genres, including R.L. Stine’s Just Beyond series (now on Disney+), graphic novel adaptations of Mary Pope Osborne’s The Magic Tree House series, and more.

"Magical and full of queer joy—this book is such a dream!"
—Alice Oseman, New York Times best-selling author of Heartstopper<br>

“Twelfth Grade Night is a heartfelt and expressive graphic novel with memorable characters, emotive art, and an engaging story. I loved it!”
—Kevin Panetta, author of Bloom<br>

Breathtaking. . . . This is no longer the Little Mermaid of our childhood, but a hardened and strong woman who is ready to take back what is rightfully hers.