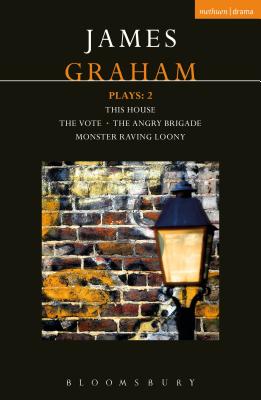 By James Graham
for information about purchasing this book, please contact orders@bookpassage.com

The second collection of plays from eminent playwright James Graham, bringing together four of his state-of-the-nation plays.

The volume includes the following plays, alongside an introduction by the author:

This House (2012) explores Westminster and the 1974 hung parliament through a combination of wit and waspish dialogue, comedy and political comment, and historical and contemporary concerns.

The Vote (2015) looks at what happens in Britain on election night through the eyes of those at the polling station. Set in a fictional London polling station, Graham's play dramatises the final ninety minutes before the polls close in the 2015 general election.

Monster Raving Loony (2016) explores the life and exploits of Screaming Lord Sutch to examine the state of the nation and Britain's post-war identity crisis. It tells the story of Sutch through a cavalcade of comic characters from music hall to Monty Python, panto to Partridge.

James Graham's work has been produced internationally. He won the Catherine Johnson Award for the Best Play 2007 for Eden's Empire. Other plays include Albert's Boy (recipient of a Pearson Playwriting Bursary), Little Madam (Finborough), Tory Boyz (Soho), The Man (Finborough), The Whisky Taster (Bush), Sons of York (Finborough), suddenlossofdignity.com (Bush), This House (National Theatre), Privacy (Donmar Warehouse), The Vote (Donmar Warehouse) and Monster Raving Loony (Theatre Royal Plymouth/Soho). James Graham also writes extensively for TV and film, including the award-winning screenplay for x + y, which was on the prestigious Brit List, the list of the best unproduced screenplays in the UK