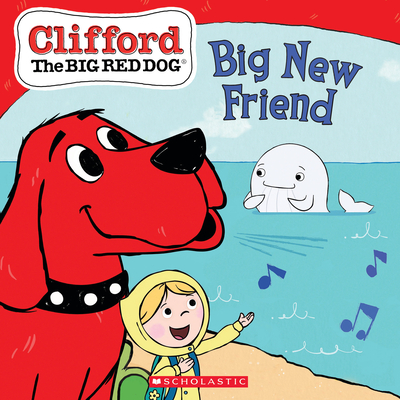 Will Clifford meet a new friend who's just his size? This adorable storybook is based on the animated Clifford TV series!

Clifford and Emily Elizabeth are going on an adventure!

The two friends hear a story about a mysterious white whale who lives off the coast of Birdwell Island. Her name is Babette, and she's the same size as Cliffordwhich makes her the perfect new friend for the big red dog!

Clifford and Emily Elizabeth try everything to get Babette to come out of hiding. Finally, they discover that the whale's favorite thing is music! Will Clifford's song convince Babette to come say hi?

Featuring adorable art from the new TV show and a full page of stickers!

MEREDITH RUSU is the author of more than fifty children’s books, specializing in titles based on television and movies such as LEGO ® Ninjago, Peppa Pig®, and Star Wars ®. She is also the author of The DATA Set series under the name Ada Hopper. Meredith lives in New Jersey with her husband and two young sons who provide much of the inspiration for her writing. When she isn’t working, Meredith enjoys karaoke, spending time with family, and going on the occasional adventure or two.

Norman Bridwell was the author and illustrator of numerous children's books, including the beloved Clifford series. The delightful stories about a big red dog named Clifford and his friend, Emily Elizabeth, have sold over 126 million copies in 13 languages!