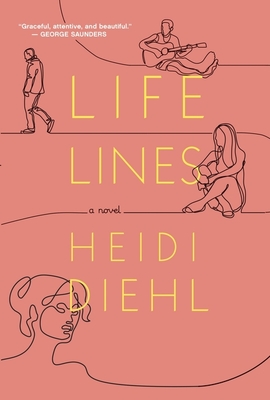 By Heidi Diehl
for information about purchasing this book, please contact orders@bookpassage.com

A graceful and intimate character study, Lifelines follows Louise and the members of her family as we learn of the choices, big and little, that shaped their lives. When her youngest daughter asks her to come to Germany for an important funeral, Louise is forced to examine what her time in Germany really meant to her and what she values now in her life in Eugene, Oregon. She has a jealous husband at home and her mercurial ex awaiting her arrival in Dusseldorf. The connections between the past and the present are revealed to be both beautiful and painful in alternating points of view.  —Luisa

"Gorgeous...Lifelines has everything you'd want in a book." —Cosmopolitan

Named a Best Book of the Summer by O Magazine,Cosmopolitan, Nylon, and the Minneapolis Star-Tribune

For fans of Meg Wolitzer and Maggie Shipstead: a sweeping debut novel following an American artist who returns to Germany—where she fell in love and had a child decades earlier—to confront her past at her former mother-in-law’s funeral.

It’s 1971 when Louise leaves Oregon for Düsseldorf, a city grappling with its nation’s horrific recent history, to study art. Soon she’s embroiled in a scene dramatically different from the one at home, thanks in large part to Dieter, a mercurial musician. Their romance ignites quickly, but life gets in the way: an unplanned pregnancy, hasty marriage, the tense balance of their creative ambitions, and—finally, fatally—a family secret that shatters Dieter, and drives Louise home.

But in 2008 she’s headed to Dieter’s mother’s funeral. She never returned to Germany, and has since remarried, had another daughter, and built a life in Oregon. As she flies into the heart of her past, she reckons with the choices she made, and the ones she didn’t, just as her family—current and former—must consider how Louise’s life has shaped their own, for better and for worse.

Exquisitely balanced, expansive yet wonderfully intimate, Lifelines explores the indelible ties of family; the shape art, history, and nationality give  to our lives; and the ways in which we are forever evolving, with each step we take, with each turn of the Earth.

HEIDI DIEHL’s writing has appeared in Colorado Review,Crazyhorse,Indiana Review,Mississippi Review,Witness, and elsewhere. She received her MFA from Brooklyn College and has won fellowships from the MacDowell Colony, the Saltonstall Foundation, and the Vermont Studio Center. She lives in Brooklyn.

Praise for Lifelines One of Oprah's Summer Reading Picks  An O Magazine Best Book of the Summer  A Cosmopolitan Best Book of the Summer  A Minneapolis Star-Tribune Best Book of the Summer A Nylon Best Book of the Summer   "Gorgeous...Lifelines has everything you'd want in a book: family secrets, love triangles, and beautiful writing."  —Cosmopolitan   "Richly textured, kaleidoscopic."  —O Magazine   "Diehl chronicles Louise's creative and emotional growth from Nixon's crash-and-burn era to the hope-and-change sunrise of Obama...Diehl's energies seem most activated by her expats' feelings of dislocation...When Dieter, momentarily at sea in Oregon, cringes at a rusted car stranded on cinder blocks in someone's front yard, you don't have to be German to feel his pain."  —New York Times Book Review   "What a graceful, attentive, and beautiful debut. Among Diehl’s abundant gifts are a wonderful eye for the telling detail, a lovely narrative patience, a playful comfort with structural panache, a genuine affection for her characters, and a keen understanding of the ways in which families actually work. The novel thrums with the sadness of life, and also with its comforts."  —George Saunders   "A fascinating interrogation of complicated histories—both cultural and personal—as well as an exploration of the roles that art, family, and creativity play in our lives.”  —Nylon   "Deeply woven...The family drama is interlaced with beautiful, meticulously detailed scenes describing Germany, from the underground music scene to the architecture and urban planning that shapes daily life. Streetscapes, stone facades, unofficial trodden pathways across grassy parks, outdoor markets selling dense rye bread—the scene is built on each page with precise detail. Diehl also writes knowledgeably about the arts, from sculpture and performance art to painting and avant-garde music. The book pulses with an almost obsessive level of musical detail, cataloguing genres like psychedelic drone and experimental dub, cult bands like Kraftwerk and the Grateful Dead, and the liberated cultural scene that thrived in the 1970s...Lifelines weaves a rich tapestry out of interconnected personal histories and shows that we are all greater than the sum of our parts."  —The Oregonian   "Ambitious." —Saratoga Living   “Lifelines is a true tapestry of a book, intricate and elegantly told, about family and nationhood, and the ways that each generation is shaped by the one that came before it. Diehl writes with a remarkable emotional intelligence that will stay with me for a very long time.”  —Julia Pierpont, New York Times-bestselling author of Among the Ten Thousand Things and The Little Book of Feminist Saints   “From the collision of art and family to the prolonged misunderstandings between characters living across cultures, Heidi Diehl has crafted a complex novel that builds with subversive power, to an assured ending. With riveting precision, Lifelines addresses an inevitable reality of adulthood: for better or worse, we remain beholden to all our relationships, even those we choose to end.” —Idra Novey, author of Ways to Disappear and Those Who Knew   "Lifelines is an arresting portrait of selv —