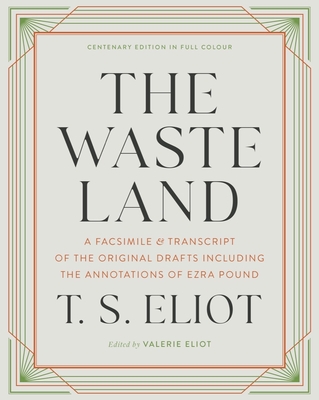 The first full-color facsimile of T. S. Eliot’s The Waste Land, the most influential poem in modern literature, in celebration of its centennial.

When the New York Public Library announced in October 1968 that its Berg Collection had acquired the original manuscript of The Waste Land, one of the most puzzling mysteries of twentieth-century literature was solved. The manuscript was not lost, as had been believed, but had remained among the papers of John Quinn, Eliot’s friend and adviser, to whom the poet had sent it in 1922.

If the discovery of the manuscript was startling, its content was even more so: the published version of The Waste Land was considerably shorter than the original. The manuscript pages illuminate how the famously elliptical poem was reduced and edited through the handwritten notes of Ezra Pound; of Eliot’s first wife, Vivien; and of Eliot himself. So that this material could be made widely available, the poet’s widow, Valerie Eliot, prepared the facsimile edition for publication in 1971, reproducing each page of the original manuscript with a clear transcript, an enlightening introduction, and explanatory notes.

In celebration of the centenary of the poem, published in the United States by Boni & Liveright in 1922, Eliot’s manuscript pages are presented in vivid color for the first time. The updated facsimile edition also offers a new appendix—including a sheet of Valerie Eliot’s corrections discovered in the Faber archive in 2021—and an insightful afterword from Faber poetry editor Matthew Hollis. Complete with the text of the first published version of The Waste Land, this definitive volume reveals the evolution of a landmark work of the twentieth century and its enduring legacy.

T. S. Eliot (1888–1965) was one of the fathers of modernism and a defining voice in English-language poetry. He was awarded the Nobel Prize for Literature in 1948.

Valerie Eliot (1926–2012) was the executor of T. S. Eliot’s literary estate and edited his published letters.

First published in 1971, edited by Eliot’s widow, they revolutionized the understanding of the poem’s creation, by making apparent Ezra Pound’s outsized editorial role, including many ruthless cuts, and also the input of Eliot’s troubled first wife, Vivienne. These pages—some handwritten, some typewritten, with wordless loops and slashes scrawled across the text and brusque observations at the side—have become famous in their own right.... Few Eliot fans will be able to resist.
— New Yorker, "Best Books of 2022"

The Albemarle receipts were not included by Valerie Eliot in her 1971 edition of the drafts of The Waste Land but have been added to this centenary edition, which seems aimed at the Eliot aficionado ready to pore over every scrap surviving in the archive and eager to discover new angles on a poem more exhaustively interpreted than any in the language—or rather languages, for it is the most polyglot of poems. This gala volume is the first to reproduce manuscripts and type-scripts in color and boasts of various ‘additional materials,’ namely those bills and the versos of three leaves: on one of these Eliot has jotted down a couple of cosmetic skin creams that he has been instructed to purchase for his first wife, Vivien, at a pharmacy on the Champs-Élysées, and on another a compressed account of the plot of The Duchess of Malfi. On the third, the verso of the ending of ‘A Game of Chess,’ Vivien has written, 'Make any of these alterations—or none if you prefer. Send me back this copy & let me have it.