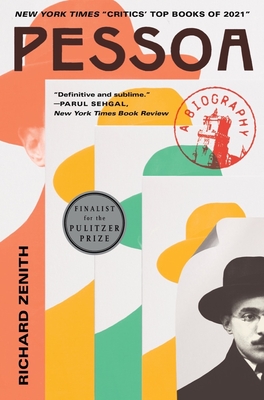 Like Richard Ellmann’s James Joyce, Richard Zenith’s Pessoa immortalizes the life of one of the twentieth century’s greatest writers.


Nearly a century after his wrenching death, the Portuguese poet Fernando Pessoa (1888–1935) remains one of our most enigmatic writers. Believing he could do “more in dreams than Napoleon,” yet haunted by the specter of hereditary madness, Pessoa invented dozens of alter egos, or “heteronyms,” under whose names he wrote in Portuguese, English, and French. Unsurprisingly, this “most multifarious of writers” (Guardian) has long eluded a definitive biographer—but in renowned translator and Pessoa scholar Richard Zenith, he has met his match.

Relatively unknown in his lifetime, Pessoa was all but destined for literary oblivion when the arc of his afterlife bent, suddenly and improbably, toward greatness, with the discovery of some 25,000 unpublished papers left in a large, wooden trunk. Drawing on this vast archive of sources as well as on unpublished family letters, and skillfully setting the poet’s life against the nationalist currents of twentieth-century European history, Zenith at last reveals the true depths of Pessoa’s teeming imagination and literary genius.

Much as Nobel laureate José Saramago brought a single heteronym to life in The Year of the Death of Ricardo Reis, Zenith traces the backstories of virtually all of Pessoa’s imagined personalities, demonstrating how they were projections, spin-offs, or metamorphoses of Pessoa himself. A solitary man who had only one, ultimately platonic love affair, Pessoa used his and his heteronyms’ writings to explore questions of sexuality, to obsessively search after spiritual truth, and to try to chart a way forward for a benighted and politically agitated Portugal.

Although he preferred the world of his mind, Pessoa was nonetheless a man of the places he inhabited, including not only Lisbon but also turn-of-the-century Durban, South Africa, where he spent nine years as a child. Zenith re-creates the drama of Pessoa’s adolescence—when the first heteronyms emerged—and his bumbling attempts to survive as a translator and publisher. Zenith introduces us, too, to Pessoa’s bohemian circle of friends, and to Ophelia Quieroz, with whom he exchanged numerous love letters. Pessoa reveals in equal force the poet’s unwavering commitment to defending homosexual writers whose books had been banned, as well as his courageous opposition to Salazar, the Portuguese dictator, toward the end of his life. In stunning, magisterial prose, Zenith contextualizes Pessoa’s posthumous literary achievements—especially his most renowned work, The Book of Disquiet.

A modern literary masterpiece, Pessoa simultaneously immortalizes the life of a literary maestro and confirms the enduring power of Pessoa’s work to speak prophetically to the disconnectedness of our modern world.

Richard Zenith is an acclaimed translator and literary critic. His translations include Pessoa’s The Book of Disquiet and Fernando Pessoa and Co.: Selected Poems, which won the PEN Award for Poetry in Translation. The recipient of Portugal’s Pessoa Prize, Zenith lives in Lisbon, Portugal.

Mammoth, definitive and sublime.... An account of a life that plucks at the very borders and burdens of the notion of a self.
— Parul Sehgal - New York Times

Monumental…. [Pessoa’s writing] was a city that needed a guide. Thanks to Zenith, it has one at last.
— Benjamin Moser - New York Times Book Review

The success of Pessoa lies in Zenith’s panoramic approach and his skill in setting Pessoa’s orderly, insular way of life against the riotous backdrop of the early twentieth century…. [and in] elegant, engaging prose that has the propulsive energy of a historical novel fueled by the occasional jolt of surrealism.
— Anahid Nersessian - New York Review of Books

Rich and illuminating... Zenith is consistently informed, witty, and attuned to surprising and satisfying connections.
— Damion Searls - The New Republic

One of the great literary biographies of the century… A magisterial account of the life of the deliciously mad Fernando Pessoa, who wrote books and stories under some 60 pseudonyms.
— Simon Winchester, New Statesman, Books of the Year

Monumental... To do justice to the magnitude and complexities of Pessoa Zenith, a translator and literary critic, spent more than a decade collating material. The result is a tour de force.
— Cláudia Pazos Alonso - Times Literary Supplement

A revelation... Such a revolutionary literary discovery seems unlikely to be on offer again. It's that good.
— David Sexton - Sunday Times

A masterpiece of literary biography. Zenith's achievement is extraordinary. By illuminating this elusive figure, Zenith has produced a work in some ways as astonishing as those of Pessoa himself.
— John Gray - New Statesman

[I]n this gloriously labyrinthine biography . . . Zenith elegantly conveys Pessoa’s eccentricity . . . while making him an exemplar of the fragmented consciousness of a modernity . . . Zenith’s dynamic prose, deep erudition, and incisive readings of Pessoa’s poetry make for a meticulous portrait of one artist’s brilliant and bewildering inner world.
— Publishers Weekly, starred review

[A] capacious, perceptive biography of the enigmatic Portuguese writer... Zenith delivers careful readings of Pessoa’s works and examines with sensitivity his varied intellectual, spiritual, and aesthetic proclivities as well as his longing for posthumous fame, which he amply accrued. Impressive research and evident enthusiasm inform a definitive biography.
— Kirkus Reviews, starred review

Zenith . . . an English-language authority on Portuguese poetry . . . fastens a mysterious literary figure to history . . . detail[ing] how Pessoa’s firsthand observations of European imperialism, young democracy, and the Great War influenced his work . . . In this extensively researched biography, Zenith’s candid and questioning tone is refreshing and necessary . . . Essential to academic collections, this biography is also accessible to general audiences interested in the potential of art that does not imitate life.
— Asa Drake - Library Journal