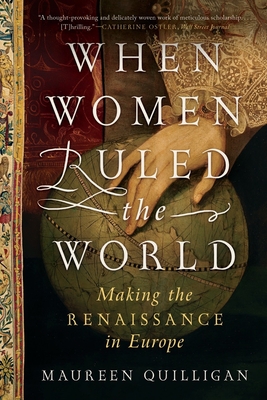 In this game-changing revisionist history, a leading scholar of the Renaissance shows how four powerful women redefined the culture of European monarchy in the glorious sixteenth century.

The sixteenth century in Europe was a time of chronic destabilization in which institutions of traditional authority were challenged and religious wars seemed unending. Yet it also witnessed the remarkable flowering of a pacifist culture, cultivated by a cohort of extraordinary women rulers—most notably, Mary Tudor; Elizabeth I; Mary, Queen of Scots; and Catherine de’ Medici—whose lives were intertwined not only by blood and marriage, but by a shared recognition that their premier places in the world of just a few dozen European monarchs required them to bond together, as women, against the forces seeking to destroy them, if not the foundations of monarchy itself.

Recasting the complex relationships among these four queens, Maureen Quilligan, a leading scholar of the Renaissance, rewrites centuries of historical analysis that sought to depict their governments as riven by personal jealousies and petty revenges. Instead, When Women Ruled the World shows how these regents carefully engendered a culture of mutual respect, focusing on the gift-giving by which they aimed to ensure ties of friendship and alliance. As Quilligan demonstrates, gifts were no mere signals of affection, but inalienable possessions, often handed down through generations, that served as agents in the creation of a steep social hierarchy that allowed women to assume political authority beyond the confines of their gender.

“With brilliant panache” (Amanda Foreman), Quilligan reveals how eleven-year-old Elizabeth I’s gift of a handmade book to her stepmother, Katherine Parr, helped facilitate peace within the tumultuous Tudor dynasty, and how Catherine de’ Medici’s gift of the Valois tapestries to her granddaughter, the soon-to-be Grand Duchess of Tuscany, both solidified and enhanced the Medici family’s prestige. Quilligan even uncovers a book of poetry given to Elizabeth I by Catherine de’ Medici as a warning against the concerted attack launched by her closest counselor, William Cecil, on the divine right of kings—an attack that ultimately resulted in the execution of her sister, Mary, Queen of Scots.

Beyond gifts, When Women Ruled the World delves into the connections the regents created among themselves, connections that historians have long considered beneath notice. “Like fellow soldiers in a sororal troop,” Quilligan writes, these women protected and aided each other. Aware of the leveling patriarchal power of the Reformation, they consolidated forces, governing as “sisters” within a royal family that exercised power by virtue of inherited right—the very right that Protestantism rejected as a basis for rule.

Vibrantly chronicling the artistic creativity and political ingenuity that flourished in the pockets of peace created by these four queens, Quilligan’s lavishly illustrated work offers a new perspective on the glorious sixteenth century and, crucially, the women who helped create it.

Maureen Quilliganis R. Florence Brinkley Distinguished Professor Emerita of English at Duke University. The author of books about medieval and Renaissance literature, she was also coeditor of the groundbreaking essay collection Rewriting the Renaissance: The Discourses of Sexual Difference in Early Modern Europe.

With meticulous attention to the letters and gifts they exchanged, Quilligan argues that [Mary Tudor, Elizabeth I, Mary Stuart, Queen of Scots, and Catherine de’ Medici] nurtured a culture of mutual respect... A useful addition to the literature on European royalty... An authoritative and sympathetic collective biography.
— Kirkus Reviews

The author pays particular attention to the way each woman navigated the prejudice against women in power... The choice to highlight connections rather than conflicts is intriguing, and Quilligan’s arguments are thought-provoking... An interesting look at the lives and relationships of four of the Renaissance’s most powerful women.
— Kathleen McCallister - Library Journal

Refuting traditional narratives of ‘personal jealousy and rancor’ between Catherine de’ Medici, Elizabeth I, Mary Tudor, and Mary, Queen of Scots, Quilligan argues that these four queens recognized that they needed to band together to protect against the ‘looming patriarchal power of the Reformation’. . . Quilligan lucidly explains the era’s complex familial, religious, and political dynamics, and draws incisive character sketches. Renaissance buffs will treasure this sparkling revisionist history.
— Publishers Weekly