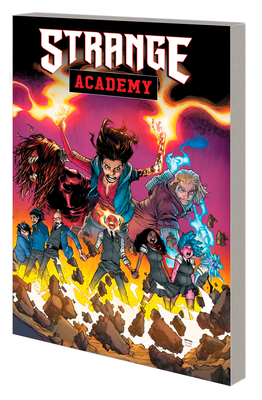 The acclaimed series starring the students of Marvel's school for sorcery reaches its climax!

Your favorite spellcasting students are back — and ready to face their final exams! But these aren’t like any tests you’ve ever taken! From day one, people have been wondering: who will be the savior of Strange Academy…and who can bring it all crashing down? All your questions are about to be answered, as the future of Marvel Magic will soon be decided once and for all! But to maintain the very existence of magic as they know it, will it take much more than what Doctor Strange and a school of students can bring to the table? Superstar creators Skottie Young and Humberto Ramos reunite to continue the Eisner-nominated saga of the Strange Academy!

Skottie Young has worked in both comics and animation for Warner Bros., Universal, Spike TV, Mattel, Fisher Price, Marvel, Dark Horse, Image and more. His distinctively stylized artwork graced runs on Human Torch, Venom, Spider-Man: Legend of the Spider-Clan and a revamp of New Warriors. He also drew the X-Men/Runaways team-up for Free Comic Book Day 2006 and a run of New X-Men. Young won acclaim from fans and critics alike with Marvel’s series of New York Times-bestselling and Eisner Award-winning adaptations of L. Frank Baum’s Oz novels with writer Eric Shanower. His Young Marvel variant covers became a sensation, leading to their own Secret Wars limited series, Giant-Size Little Marvel: AVX. Also a flourishing writer, Young brought his flair for madcap antics delivered in his trademark kinetic style to Marvel’s Rocket Raccoon and Deadpool, as well as acclaimed creator-owned series I Hate Fairyland, Middlewest and The Me You Love In The Dark. He lives in Kansas with his wife, two sons, and two dogs.

Artist Humberto Ramos made his American comics debut in 1994 with DC’s Impulse, featuring the Flash’s brash grandson. In 1998, Ramos launched the creator-owned Crimson under Wildstorm’s Cliffhanger imprint, illustrating the title for more than two years. He then moved to Marvel, becoming one of the most recognizable and innovative talents in comics. Seamlessly blending both Eastern and Western styles, the artist’s artist has worked on many of Marvel’s most iconic characters — including Spider-Man, Wolverine and the X-Men — in addition to a run on the fan-favorite Runaways. In recent years, Ramos brought his kinetic artwork to the pages Extraordinary X-Men and Champions.