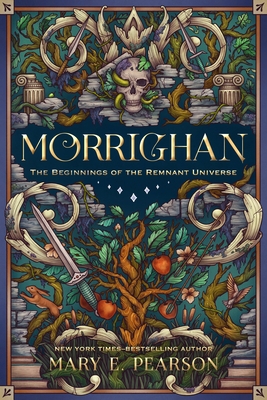 A richly illustrated and romantic origin story of Mary E. Pearson's Remnant universe, the world of the BookTok sensations Dance of Thieves and Vow of Thieves and the New York Times-bestselling Remnant Chronicles.

Before borders were drawn, before treaties were signed, before wars were waged anew, before the great kingdoms of the Remnant were even born and the world of old was only a hazy slate of memory told in story and legend, a girl and her family fought to survive.

And that girl’s name was Morrighan.

Discover the origin story of the Remnant universe, penned by the New York Times–bestselling master storyteller Mary E. Pearson, in this lush collector’s edition prequel with lavish illustrations, a romance for the ages, and a magic that stirs the heart.

Praise for the Remnant universe:

"Intense, thrilling, and clever . . . a can’t miss book for fans of YA fantasy." —YA Books Central

“A brilliant fantasy with a boldly beating heart. Mary E. Pearson is a fearless storyteller—I’m still trying to catch my breath from this book.” —Stephanie Garber, New York Times–bestselling author of Caraval and Legendary

"The slow-burning, seductive romance never overwhelms the intricate plot, which is built with layers upon layers of twists, reveals, and double-crosses." —Booklist

"This novel has it all—romance, conflict, danger, and humor." —School Library Journal

"Pearson is a gifted storyteller and spinner of eminently satisfying romances and fantasy." —Publishers Weekly

The Beauty of Darkness

The Heart of Betrayal

The Kiss of Deception