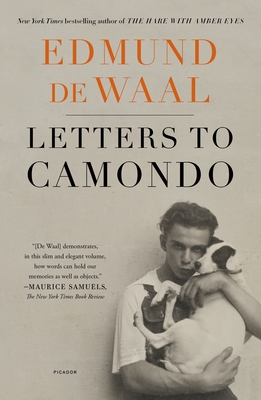 A tragic family history told in a collection of imaginary letters to a famed collector, Moïse de Camondo.

63 rue de Monceau, Paris
Dear friend,
As you may have guessed by now, I am not in your house by accident. I know your street rather well.

Count Moïse de Camondo lived a few doors away from Edmund de Waal’s forebears, the Ephrussi, first encountered in his bestselling memoir, The Hare with Amber Eyes. Like the Ephrussi, the Camondos were part of belle epoque high society. They were also targets of antisemitism.

Camondo created a spectacular house and filled it with the greatest private collection of French eighteenth-century art for his son, Nissim, to inherit. But when Nissim was killed in the First World War, it became a memorial and, upon the Count’s death, was bequeathed to France.

The Musée Nissim de Camondo has remained unchanged since 1936. De Waal explores the lavish rooms and detailed archives and uncovers new layers to the family story. In a series of haunting letters addressed to the Count, he tells us what happened next.

Edmund de Waal is an artist who has exhibited in museums and galleries around the world. His bestselling memoir, The Hare with Amber Eyes, has won many prizes and has been translated into twenty-nine languages. The White Road, a journey into the history of porcelain, was published in 2015. He lives in London with his family.

"[de Waal] demonstrates, in this slim and elegant volume, how words can hold our memories as well as objects while taking up infinitely less space." —Maurice Samuels, The New York Times Book Review

"Superb . . . This companion study to The Hare with Amber Eyes is the skilfully told story of a family's collection of art objects . . . consistently illuminating . . . excellently illustrated . . . de Waal's excavation of the meanings of assimilation is considered, compassionate and appreciative of its costs . . . He is a wise guide to people and things that are dispersed and are collected . . . This book is a wonderful tribute to a family and to an idea." —Nicholas Wroe, The Guardian

“A slender book [that] reads like a long prose poem” —Charles Trueheart, The American Scholar

"Letters to Camondo immerses you in another age--one as sharply torn with rifts and bigotry, political uncertainty and changing fortunes as our own--but also a time of grace and the deliberate cultivation of pleasure . . . de Waal creates a dazzling picture of what it means to live graciously." —Nilanjana Roy, The Financial Times

"De Waal is a deep insider writing a series of familiar and familial letters to Moïse de Camondo, addressing him as ‘Friend’, ‘Dear friend’, ‘Monsieur’, ‘Cher Monsieur’, ‘Mon cher Monsieur’ and even ‘Monsieur le Comte’. His manner is softly prowling, whether inside or outside the house and its archives; his tone is intimate, melancholic, speculative, at times whimsical. At the end he sternly resists any idea of ‘closure’ about the disasters of 1941-45." —Julian Barnes, London Review of Books

"I was deeply moved . . . [de Waal] has found a way to meditate on exile, migration and polarization that feels painfully relevant." —Johanna Thomas-Corr, Sunday Times