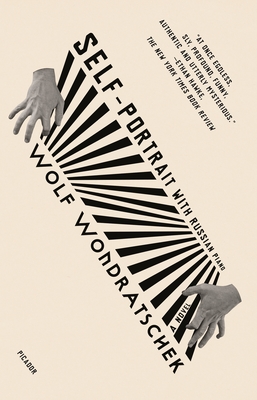 A legendary literary figure who initiated a one-man Beat Generation in his native Germany, Wolf Wondratschek “is eccentric, monomaniacal, romantic—his texts are imbued with a wonderful, reckless nonchalance” (Patrick Süskind). Now, he tells a story of a man looking back on his life in an honest portrait of the artist as an old man.

Vienna is an uncanny, magical, and sometimes brutally alienating city. The past lives on in the cafés where lost souls come to kill time and hash over the bygone glories of the twentieth century—or maybe just a recent love affair. In one of these cafés, our anonymous narrator meets a strange character, “like someone out of a novel”: a decrepit old Russian named Suvorin.

A Soviet pianist of international renown, Suvorin committed career suicide when he developed a violent distaste for the sound of applause. This eccentric gentleman—sometimes charming, sometimes sulky, sometimes disconcertingly frank—knows the end of his life is approaching, and allows himself to be convinced to tell his life story. Over a series of coffee dates, punctuated by confessions, anecdotes, and rages—and by the narrator’s schemes to keep his quarry talking—a strained friendship develops between the two men, and it soon becomes difficult to tell who is more dependent on the other.

Rhapsodic and melancholic, with shades of Vladimir Nabokov, W. G. Sebald, Hans Keilson, and Thomas Bernhard, Wolf Wondratschek’s Self-Portrait with Russian Piano is a literary sonata circling the eternal question of whether beauty, music, and passion are worth the sacrifices some people are compelled to make for them.

“A romantic in a madhouse. To let Wondratschek’s voice be drowned in the babble of today’s literature would be a colossal mistake.” —Patrick Süskind, internationally bestselling author of Perfume: The Story of a Murderer

Wolf Wondratschek, born 1943 in Rudolfstadt, studied literature and philosophy in Heidelberg, Göttingen, and Frankfurt. His first book, When the Day Still Started with a Bullet Wound, is legendary in the German-language world, initiating a one-man Beat Generation, and ensuring that he became one of Germany's most successful contemporary writers. His vast body of work comprises novels, collections of poems, short stories, essays, reportage, and radio plays. He lives in Vienna.

"[Self-Portrait with Russian Piano] is at once egoless, sly, profound, funny, authentic and utterly mysterious—without ever seeming to break a sweat . . . An immense humility encompasses the novel. In a world that shouts, this book is a song played softly, and slowly."
—Ethan Hawke, The New York Times Book Review

“A tender character study of a wry and jaundiced former piano virtuoso . . . [Wondratschek] writes about music with intimacy and tenderness, and peppers his narrative with delightful anecdotes of the foibles of high-art celebrities. [His] deeply felt meditation on the joys and sorrows of a life in music delivers the goods.”
—Publishers Weekly

"Wondratschek’s layered narrative reflects on language, art, politics, and history, and though nothing much happens in it, there is plenty to think about . . . Readers with a bent for Thomas Mann and Elias Canetti will find this book a pleasure." —Kirkus

"In Self-Portrait with Russian Piano, Wolf Wondratschek renders the experience of being in the world during the last seventy years as a prose sonata of beguiling intricacies and beatitudes, a strong sense of wreckage paired with the sublime consolations of music, art, sex, and intelligence. An autumnal and—in the sense of the long view—droll story told in scratches and claw marks, that speaks of today as if it were posthumous."
—Gary Indiana, author of Horse Crazy and I Can Give You Anything But Love

"Wondratschek is eccentric, monomaniacal, romantic—his texts are imbued with a wonderful, reckless nonchalance. A romantic in a madhouse. To let Wondratschek's voice be drowned in the babble of today's literature would be a colossal mistake."
—Patrick Süskind, author of Perfume