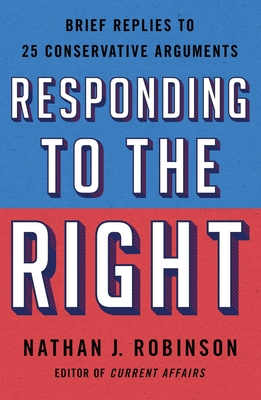 The editor of Current Affairs artfully and efficiently debunks a series of common right-wing arguments.

Are taxes theft? Is abortion murder? Does regulation destroy jobs? Is white privilege a lie? Conservative talking points are everywhere, and through well-funded media like Fox News, Breitbart, and YouTube’s "Prager University," the right has an impressive record of packaging its views for a general audience. Clearly, the left needs to do a better job of fighting back.

For the last five years, Current Affairs editor Nathan J. Robinson has developed a reputation as a meticulous slayer of irrational and bigoted arguments. He has tangled with the likes of Ben Shapiro, Jordan Peterson, and Charles Murray, exposing their flimsy logic and distorted facts with forensic thoroughness and savage wit.

In Responding to the Right, Robinson blasts right-wing nonsense with devastating intellectual weaponry, revealing how everyone from Ann Coulter to National Review uses fear and lies to manipulate the public. He gives a detailed explanation of how conservative arguments work and why we need to resist them, then goes through 100 separate talking points, showing precisely why each one fails.

This essential handbook is a stimulating source of issues to debate and a comprehensive challenge to dozens of dominant orthodoxies. It will set a new standard for leftist critique and become an invaluable toolkit for the millions of progressives fighting the political battles of our age.

Nathan J. Robinson is a leading voice of millennial left politics. He is the editor of Current Affairs. His work has appeared in The New York Times, The Washington Post, The New Republic, The Nation, Salon, The Guardian, and elsewhere. A graduate of Yale Law School, he is a PhD student in Sociology and Social Policy at Harvard University, where his work focuses on contemporary left social movements. He is the author of Why You Should Be A Socialist.