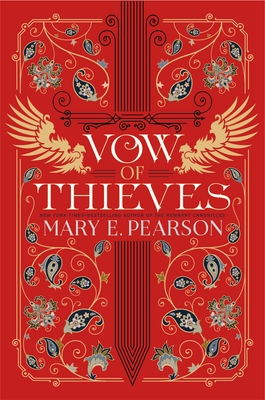 This is book number 2 in the Dance of Thieves series.

Vow of Thieves is the thrilling sequel to Dance of Thieves, set in the same world as Mary E. Pearson's New York Times-bestselling Remnant Chronicles.

Kazi and Jase have survived, stronger and more in love than ever. Their new life now lies before them—the Ballengers will be outlaws no longer, Tor's Watch will be a kingdom, and Kazi and Jase will meet all challenges side by side, together at last.

But an ominous warning mars their journey back, and they soon find themselves captured in a tangled web of deceit woven by their greatest enemies and unlikeliest allies, a place where betrayals run deeper and more deadly than either had thought possible, and where timeless ambitions threaten to destroy them both.

"Intense, thrilling, and clever . . . a can’t miss book for fans of YA fantasy." —YA Books Central

“A brilliant fantasy with a boldly beating heart. Mary E. Pearson is a fearless storyteller—I’m still trying to catch my breath from this book.” —Stephanie Garber, New York Times–bestselling author of Caraval and Legendary

"The slow-burning, seductive romance never overwhelms the intricate plot, which is built with layers upon layers of twists, reveals, and double-crosses." —Booklist

"This novel has it all—romance, conflict, danger, and humor." —School Library Journal

"Pearson is a gifted storyteller and spinner of eminently satisfying romances and fantasy." —Publishers Weekly
The Beauty of Darkness:

The Heart of Betrayal:

The Kiss of Deception: