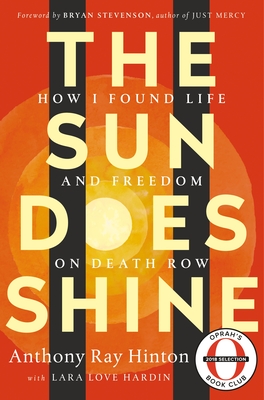 A powerful, revealing story of hope, love, justice, and the power of reading by a man who spent thirty years on death row for a crime he didn't commit.

“An amazing and heartwarming story, it restores our faith in the inherent goodness of humanity.”
—Archbishop Desmond Tutu

In 1985, Anthony Ray Hinton was arrested and charged with two counts of capital murder in Alabama. Stunned, confused, and only twenty–nine years old, Hinton knew that it was a case of mistaken identity and believed that the truth would prove his innocence and ultimately set him free.

But with no money and a different system of justice for a poor black man in the South, Hinton was sentenced to death by electrocution. He spent his first three years on Death Row at Holman State Prison in agonizing silence—full of despair and anger toward all those who had sent an innocent man to his death. But as Hinton realized and accepted his fate, he resolved not only to survive, but find a way to live on Death Row. For the next twenty–seven years he was a beacon—transforming not only his own spirit, but those of his fellow inmates, fifty–four of whom were executed mere feet from his cell. With the help of civil rights attorney and bestselling author of Just Mercy, Bryan Stevenson, Hinton won his release in 2015.

With a foreword by Stevenson, The Sun Does Shine is an extraordinary testament to the power of hope sustained through the darkest times. Destined to be a classic memoir of wrongful imprisonment and freedom won, Hinton’s memoir tells his dramatic thirty–year journey and shows how you can take away a man’s freedom, but you can’t take away his imagination, humor, or joy.

ANTHONY RAY HINTON spent nearly thirty years on death row for crimes he didn’t commit. Released in April 2015, Hinton now speaks widely on prison reform and the power of faith and forgiveness. He lives in Alabama.

Lara Love Hardin is the COO and Editorial Director of Idea Architects, a creative book and media agency creating a wiser, healthier, more just world. She has an MFA in creative writing from UC Irvine and has collaborated on more than ten books, including the New York Times bestsellers The Sun Does Shine and Designing Your Life. She lives in Santa Cruz, California with her husband, two dogs, and six children.

“Nelson Mandela spent 27 years in prison for opposing a racist system in South Africa. Anthony Ray Hinton spent 30 years on death row because a racist system still exists in America. Both emerged from their incarceration with a profound capacity to forgive. They are stunning examples of how the most horrendous cruelty can lead to the most transcendent compassion. The Sun Does Shine is both a cautionary tale for all who think that a great nation can easily forget its past and inspiring proof of the inability to condemn a man's capacity for hope, love, and joy. An amazing and heartwarming story, it restores our faith in the inherent goodness of humanity.” - Archbishop Desmond Tutu

“No one I have represented has inspired me more than Anthony Ray Hinton and I believe his compelling and unique story will similarly inspire our nation and readers all over the world.” - Bryan Stevenson, New York Times Bestselling Author, Just Mercy

“If there is ever a story that needs to be told, it is this one. Anthony Ray Hinton is extraordinary, an example to us all of the power of the human spirit to rise above complete injustice. He is using his experience as a way to turn the broken criminal justice system upside down. He is a brilliant storyteller, and his book will make people laugh, cry, and change their own lives for the better. It will also inspire people to never accept the unacceptable, like the death penalty. The Sun Does Shine will be a book that people all around the world will never forget.” - Richard Branson

"I've met Anthony Ray Hinton, and he's an extraordinary man. He stands out among exonerees (and I know hundreds of them) for his dignity and gentle soul encased in his massive frame. His story is important and compelling. Bryan Stevenson, a national treasure and central character in this story, fought tirelessly for over fifteen years and won a rare and landmark case in the United States Supreme Court. The Sun Does Shine is the gripping and inspirational story that the public has been waiting for." - Barry Scheck, Attorney, Director of the Innocence Project

“[The Sun Does Shine], collaboratively written with Hardin, is a troubling, moving, and ultimately exalting journey through the decades Hinton lived under the threat of death while an unjust system that refused to acknowledge mistakes failed him repeatedly.” - Booklist, starred review

“A memoir of spectacular grace...as moving and inspiring as memoirs get.” - Garden & Gun

“An urgent, emotional memoir from one of the longest-serving condemned death row inmates to be found innocent in America. ... A heart-wrenching yet ultimately hopeful story about truth, justice, and the need for criminal justice reform.” – Kirkus, starred review

"A testament to the power of faith and the strength of hope, The Sun Does Shine is an unforgettable and timely read that illuminates the long overdue need for criminal justice reform in America." - Bustle

"This powerful memoir is testament to a man who survived against all odds and showed how powerful the human spirit can be." - The Malestrom

"Hinton’s ability to speak about the injustices he faces with such poise and composure is his greatest gift."
- The Harvard Crimson

"A must for anyone involved in criminal justice. Suggested reading for anyone interested in learning more about death row and its horrors." - Library Journal, starred review

“The Sun Does Shine could be the most impressive book you’ll lay eyes on." - Houston Style Magazine

"Illuminating and emotionally powerful, simple and complex, and destined to become a classic in American prison literature." - The Pittsburgh Post-Gazette