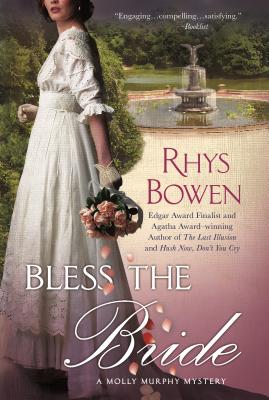 By Rhys Bowen
for information about purchasing this book, please contact orders@bookpassage.com

This is book number 10 in the Molly Murphy Mysteries series.

Irish sleuth Molly Murphy is hired to find a girl on the run in Chinatown only to find that the man who wanted her found has been killed in Rhys Bowen's tenth in this award-winning series.

With Molly Murphy's wedding to NYPD Captain Daniel Sullivan quickly approaching, the Irish sleuth heads to the Westchester County countryside, where his mother can lend her a hand and advise her on a bride's proper place. And shockingly, Molly seems to be agreeing. She has already promised that she'll close up her PI business and settle down after marrying, but she isn't a married woman yet. So, when she gets word of a possible case, she sneaks back into the city to squeeze in a little more sleuthing before the wedding bells can ring.

A wealthy Chinese immigrant wants her to find his missing bride, and Molly---sure she isn't getting the whole story---suspects that his bride ran off. But where could she go? The only Chinese women in early-twentieth-century New York are kept under lock and key, and Molly can't help but wonder if she's saving the woman from the streets or helping to lock her away for good.

Rhys Bowen is the author of the award-winning Molly Murphy and Constable Evans mysteries. Her novels have garnered an impressive array of awards and nominations, including the Anthony Award for her novel For the Love of Mike and the Agatha Award for Murphy’s Law. Her books have also won the Bruce Alexander Historical Award and the Herodotus Award, and have been shortlisted for the Edgar, the Agatha, the Macavity, the Barry, and the Mary Higgins Clark Award. She has also written Her Royal Spyness, a series about a minor royal in 1930s England, and she is the author of several short stories, including the Anthony Award–winning “Doppelganger.” Her story “Voodoo” was chosen to be part of the anthology of the best of 50 years of Alfred Hitchcock Mystery Magazine. Ms. Bowen was born in Bath, England, and worked as an announcer and studio manager for the BBC in London, before moving to Australia and then California. It was here she started writing children’s and young adult novels, and then moved on to mysteries with the Constable Evans novels. When not writing she loves to travel, sing, hike, play her Celtic harp, and entertain her grandchildren. She lives in San Rafael, California.

“Winning…The gutsy Molly, who's no prim Edwardian miss, will appeal to fans of contemporary female detectives.” —Publishers Weekly on THE LAST ILLUSION

“This historical mystery delivers a top-notch, detail-rich story full of intriguing characters. Fans of the 1920s private detective Maisie Dobbs should give this series a try.” —Booklist on THE LAST ILLUSION

“This installment outshines the others in character development and plot complexity. Details of Molly's new cases are knit together with the accoutrements of 1918 New York City life…Don't miss this great period puzzler reminiscent of Dame Agatha's mysteries and Gillian Linscott's Nell Bray series.” —Booklist on IN A GILDED CAGE

“Delightful…Bowen does a splendid job of capturing the flavor of early 20th-century New York and bringing to life its warm and human inhabitants.” —Publishers Weekly on IN A GILDED CAGE

“Feisty, independent Molly and the historical New York background give good value.” —Kirkus Reviews on IN A GILDED CAGE

“Winning…It's all in a day's work for this delightfully spunky heroine.” —Publishers Weekly on TELL ME, PRETTY MAIDEN

“For readers who love mysteries more for character development than puzzle solving, the seventh Molly Murphy novel... does not disappoint.” —Booklist on TELL ME, PRETTY MAIDEN

“Readers will surely testify that Murphy has become one of their favorite characters...This book is a keeper.” —Tampa Tribune on IN DUBLIN'S FAIR CITY

“Molly is an indomitable creature…The book bounces along in the hands of Ms. Bowen and her Molly, and there is no doubt that she will be back causing trouble.” —Washington Times on IN DUBLIN'S FAIR CITY

“The feisty Molly rarely disappoints in this rousing yarn seasoned with a dash of Irish history.” —Kirkus Reviews (starred review) on IN DUBLIN'S FAIR CITY

“Entertains readers and teaches them about the immigrant experience…charming.” —Tampa Tribune on OH DANNY BOY

“An evocatively recreated picture of New York City's Greenwich Village in 1902 and the city's rich upstate suburbs…[a] colorful series, a worthy extension of the Maan Meyers ‘Dutchman' books about historical Gotham.” —Chicago Tribune on IN LIKE FLYNN

“Bowen's best.” —Toronto Globe & Mail on IN LIKE FLYNN

“Compelling…Rhys Bowen continues her evocative look at the immigrant experience in her third Murphy novel.” —Hartford Courant on FOR THE LOVE OF MIKE

“Add brutal city gangs, seamy politics, bribed policemen, even a sweatshop fire, and you have the usual mix that makes Bowen's books so entertaining.” —Tampa Tribune on FOR THE LOVE OF MIKE

“A fresh and irrepressible new heroine.” —Romantic Times on DEATH OF RILEY

“Bowen tells a phenomenal story, and it will be a real treat to see what fate has in store for Molly and Daniel!” —Romantic Times (Top Pick) on MURPHY'S LAW