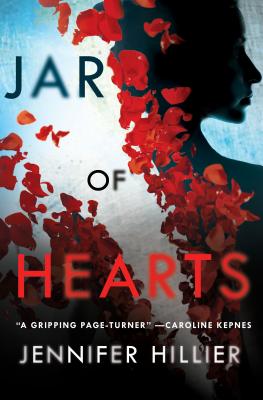 By Jennifer Hillier
for information about purchasing this book, please contact orders@bookpassage.com

This is an exquisitely dark and satisfying thriller. The discovery that their old high school friend, Angela, did not actually disappear in their junior year, but was murdered, sends Georgina and Kaiser’s lives reeling. But even after all of the secrets are revealed, there remains a dark shadow lurking in the corners of this story. Just when you think you understand what happened, another surprise is waiting for you. Jennifer Hillier ratchets up the suspense, while exposing the dark side of society along with the flaws we may find in our own hearts.  —Luisa

"Jar of Hearts grabs you by the throat! The perfect blend of riveting characters, chilling details, and gasping twists in this standout thriller will keep you frantically reading until the explosive end.” – Lisa Gardner, New York Times bestselling author of Right Behind You

This is the story of three best friends: one who was murdered, one who went to prison, and one who's been searching for the truth all these years . . .

When she was sixteen years old, Angela Wong—one of the most popular girls in school—disappeared without a trace. Nobody ever suspected that her best friend, Georgina Shaw, now an executive and rising star at her Seattle pharmaceutical company, was involved in any way. Certainly not Kaiser Brody, who was close with both girls back in high school.

But fourteen years later, Angela Wong's remains are discovered in the woods near Geo's childhood home. And Kaiser—now a detective with Seattle PD—finally learns the truth: Angela was a victim of Calvin James. The same Calvin James who murdered at least three other women.

To the authorities, Calvin is a serial killer. But to Geo, he's something else entirely. Back in high school, Calvin was Geo's first love. Turbulent and often volatile, their relationship bordered on obsession from the moment they met right up until the night Angela was killed.

While everyone thinks they finally know the truth, there are dark secrets buried deep. And what happened that fateful night is more complex and more chilling than anyone really knows. Now the obsessive past catches up with the deadly present when new bodies begin to turn up, killed in the exact same manner as Angela Wong.

JENNIFER HILLIER was born and raised in Toronto, Canada, lived in the Seattle area for years, and has just moved back to Toronto with her husband and son.

Jennifer is the author of Wonderland, Creep, and Jar of Hearts.

"Jennifer Hillier is a thriller queen so skilled at her craft that I'm convinced we simply don't deserve her." —Bookriot

“Jar of Hearts is a modern “Silence of the Lambs” without the liver and fava beans… compelling and creepily suspenseful.” —Aspen Daily News

"It's not often that a mystery features such a fresh plot. Jennifer Hillier's thrilling, and quite terrifying, Jar of Hearts is definitely not something you've read before...The answers will surprise even the most hardened thriller readers." —Cleveland Plain Dealer

"Jar of Hearts is a riveting story that readers will not want to put down... Murder, lies, grief, obsession, guilt, friendship and distorted love add up to make a gripping story." —Military Press

"Mesmerizing... Find a comfortable chair because you won't move until the last page." —Milwaukee Journal-Sentinel

"There is a dynamite thriller-horror plot pulsing through these pages... Hillier has a Chelsea Cain-like ability to horrify her readers in a way that feels agonizingly real." —Booklist

"A gripping page-turner about crime and punishment, guilt and hope...this one hurts, and that's a compliment." —Caroline Kepnes, New York Times bestselling author of You and Hidden Bodies

"Intense and compelling, Jar of Hearts is a well-written blend of fascinating characters and a deeply layered story, which unwinds with excruciating intensity. This page-turner will grip your imagination until the very last, astonishing twist." —Chevy Stevens, New York Times bestselling author of Still Missing and Never Let You Go

"Jar of Hearts is harrowing and intense—a vivid look at the long repercussions of violent crime, with a central character you won't soon forget. Jennifer Hillier locks you in on the first page, and astonishes to the last." —Joseph Finder, New York Times bestselling author of The Switch

"We all have embarrassing exes, right? You almost feel bad for Geo, the slippery heroine at the heart of Jennifer Hillier’s dark and twisted tale. It’s just that Geo's ex turns out to be a serial killer. And, maybe, just maybe, she had something to do with his first murder; and, oh, that first murder victim was one of Geo’s best friends. Hmm. I was hooked on page one. Hillier’s masterful story-telling and compelling voice pulled me deeper and deeper. The plot only twisted and ratcheted tighter from there until I couldn’t pull away. This is a smart, edgy thriller with lots of surprises. Buckle up." —Lisa Unger, New York Times bestselling author of The Red Hunter

"As dark as a storm-torn night and just as unnerving, Jar of Hearts will have readers gasping in shock as they tear through the pages. Suspenseful, gritty and utterly unforgettable." —Riley Sager, bestselling author of Final Girls