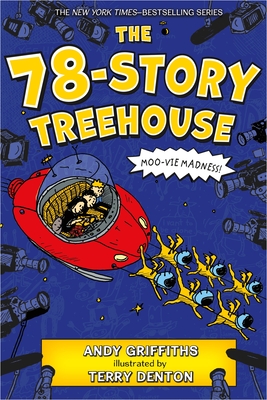 This is book number 6 in the The Treehouse Books series.

New York Times bestselling author Andy Griffiths invites readers to come hang out with him and his friend Terry in their 78-Story Treehouse—the sixth book in the illustrated chapter book series filled with Andy and Terry's signature slapstick humor!

Andy and Terry live in a 78-story treehouse. (It used to be a 65-story treehouse, but they just keep building more levels!) It has a drive-thru car wash, a courtroom with a robot judge called Edward Gavelhead, a scribbletorium, a combining machine, an ALL-BALL sports stadium, a high-security potato chip storage facility, and an open-air movie theatre with a super-giant screen . . . which is a very useful thing to have now that Terry’s going to be a big-shot movie star!

After Andy gets cut out of the movie, he and Terry have a big fight and decide they don’t want to be best friends anymore. But with a herd of sneaky spy cows out to steal all their story ideas, can Andy and Terry make up before it’s too late?

Praise for the Treehouse series:

"Will appeal to fans of Jeff Kinney and Dav Pilkey. . . . The wonderfully random slapstick humor is tailor-made for reluctant readers. . . . A treat for all." —Booklist on The 13-Story Treehouse

Andy Griffiths is the New York Times bestselling author of The Day My Butt Went Psycho!, Zombie Butts from Uranus!, and Butt Wars! The Final Conflict, as well as the Treehouse Series and Killer Koalas from Outer Space. In 2007, he became the first Australian author to win six children’s choice awards in one year for Just Shocking! He is passionate about inspiring a love of books in his young readers, and works as an ambassador for the Indigenous Literacy Project, which provides books and literacy resources to remote indigenous communities around Australia. Andy is a big fan of Dr. Seuss and of cauliflower. He lives in Melbourne, Australia, and is Australia’s most popular children’s writer.

Terry Denton is known for his humorous illustration style and has worked with Andy Griffiths on the Treehouse series and the JUST! books among others. He lives by the sea in Australia with his wife, three kids, and a pop-up toaster that only toasts on one side.

Praise for Andy Griffiths and the Treehouse series:

"Will appeal to fans of Jeff Kinney and Dav Pilkey. . . . The wonderfully random slapstick humor is tailor-made for reluctant readers. . . . A treat for all." —Booklist on The 13-Story Treehouse

"Twice the treehouse, twice the fun? You bet. . . . Denton's furiously scrawled line drawings milk the silly, gross-out gags for everything they're worth. Kids should be flipping pages faster than a pair of inflatable underpants can skyrocket the young heroes to safety." —Publishers Weekly, starred review,on The 26-Story Treehouse

"This zany sequel, as much cartoon illustration as text, is an almost nonstop adventure." —Booklist on The 26-Story Treehouse

"Middle-grade boys in particular will get a huge chortle out of this book, and there is enough going on to support classroom discussion about physics, chemistry and other physical sciences. The story is simplistic enough to appeal to reluctant readers, but amusing enough to hold better readers' interest." —Children's Literature on The 52-Story Treehouse