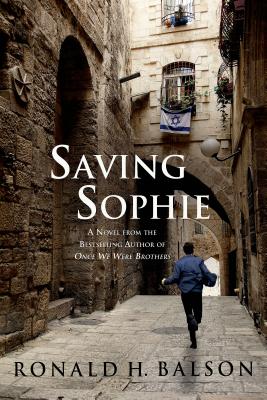 By Ronald H. Balson
Out of Print

From Ronald H. Balson, author of Once We Were Brothers, Saving Sophie is the powerful story of the lengths a father will go through to protect his daughter and an action-packed thriller that will take you on an unforgettable journey of murder and deception, testing the bonds of family and love.

Jack Sommers was just an ordinary attorney from Chicago. That is, until his wife passed away, his young daughter was kidnapped, and he became the main suspect in an $88 million dollar embezzlement case. Now, Jack is on the run, hoping to avoid the feds long enough to rescue his daughter, Sophie, from her maternal grandfather, a suspected terrorist in Palestine.

With the help of the investigative team who first appeared in Once We Were Brothers, Liam and Catherine, and a new CIA operative, a secret mission is launched to not only rescue Sophie, but also to thwart a major terrorist attack in Hebron. But will being caught in the crossfires of the Palestine-Israeli conflict keep their team from accomplishing the task at hand, or can they overcome the odds and save countless lives, including their own?

RONALD H. BALSON is a Chicago trial attorney, an educator and writer. His practice has taken him to several international venues, including villages in Poland that inspired his first novel, Once We Were Brothers.