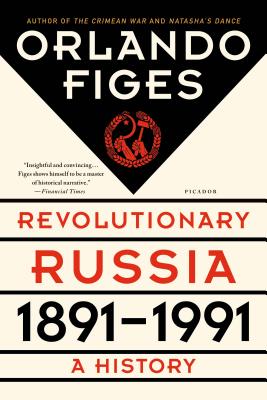 AN ORIGINAL READING OF THE RUSSIAN REVOLUTION, EXAMINING IT NOT AS A SINGLE EVENT BUT AS A HUNDRED-YEAR CYCLE OF VIOLENCE IN PURSUIT OF UTOPIAN DREAMS

In this elegant and incisive account, Orlando Figes offers an illuminating new perspective on the Russian Revolution. While other historians have focused their examinations on the cataclysmic years immediately before and after 1917, Figes shows how the revolution, while it changed in form and character, nevertheless retained the same idealistic goals throughout, from its origins in the famine crisis of 1891 until its end with the collapse of the Soviet regime in 1991. Until the very end of the Soviet system, its leaders believed they were carrying out the revolution Lenin had begun.
With the authority and distinctive style that have marked his magisterial histories, Figes delivers an accessible and paradigm-shifting reconsideration of one of the defining events of the twentieth century.

Orlando Figes is the author of A People's Tragedy, Natasha's Dance, and The Crimean War, among other books. His works have been translated into twenty-seven languages. A professor of history at Birkbeck, University of London and a frequent contributor to The New York Review of Books, Figes is the recipient of the Wolfson History Prize, the W. H. Smith Literary Award, and the Los Angeles Times Book Prize. He lives in London.

“A primer intended for readers unfamiliar with the territory, it sparkles with ideas, vivid storytelling, poignant anecdotes, and pithy phrases . . . Fresh and dramatic.” —Victor Sebestyen, The Sunday Times (London)

“Elegant, lucid...Few writers have conveyed the splendors and horrors--indeed, the often grinding bleakness--of Russian history as well as Figes, and he is in full form here . . . A refreshing new perspective on the antecedents behind today's headlines.” —Star Tribune (Minneapolis)