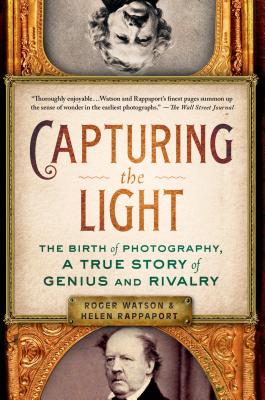 An intimate look at the journeys of two men—a gentleman scientist and a visionary artist—as they struggled to capture the world around them, and in the process invented modern photography

During the 1830s, in an atmosphere of intense scientific enquiry fostered by the industrial revolution, two quite different men—one in France, one in England—developed their own dramatically different photographic processes in total ignorance of each other's work. These two lone geniuses—Henry Fox Talbot in the seclusion of his English country estate at Lacock Abbey and Louis Daguerre in the heart of post-revolutionary Paris—through diligence, disappointment and sheer hard work overcame extraordinary odds to achieve the one thing man had for centuries been trying to do—to solve the ancient puzzle of how to capture the light and in so doing make nature 'paint its own portrait'. With the creation of their two radically different processes—the Daguerreotype and the Talbotype—these two giants of early photography changed the world and how we see it.
Drawing on a wide range of original, contemporary sources and featuring plates in colour, sepia and black and white, many of them rare or previously unseen, Capturing the Light by Roger Watson and Helen Rappaport charts an extraordinary tale of genius, rivalry and human resourcefulness in the quest to produce the world's first photograph.

ROGER WATSON is a world authority on the early history of photography. He is the co-author of Capturing the Light and is currently the Curator of the Fox Talbot Museum at Lacock Abbey and an occasional lecturer at DeMontfort University in Leicester.

DR. HELEN RAPPAPORT is the New York Times bestselling author of several books, including A Magnificent Obsession, The Romanov Sisters and Caught in the Revolution. She studied Russian Special Studies at Leeds University and is a Fellow of the Royal Historical Society, a specialist in Imperial Russian and Victorian history, and a frequent historical consultant on TV and radio. She lives in West Dorset.

“A dual biography of Louis-Jacques-Mandé Daguerre and William Henry Fox Talbot, two men who separately announced inventions of photographic processes in France and England in 1839. The book is very readable, even exciting--good on the science and particularly good on the characters and social backgrounds of the two men. . . . Silver nitrate has been superseded by pixels for image making, but it was once the cutting edge, with all the excitement that goes with the miraculous.” —Wall Street Journal

“A well-timed and welcome history of the invention and spread of photography in the nineteenth century.” —Booklist

“Rappaport offers an absorbing, perceptive, and detailed picture of a constitutional monarchy in crisis.” —Publishers Weekly on A Magnificent Obsession

“As shocking and immediate as a thriller. . . . [A] gripping read.” —People magazine, 3 ½ stars on The Last Days of the Romanovs

“Quite simply, stunning. . . . Chilling and poignant, this is how history books should be written.” —Alison Weir, author of Henry VIII: The King and His Court on The Last Days of the Romanovs