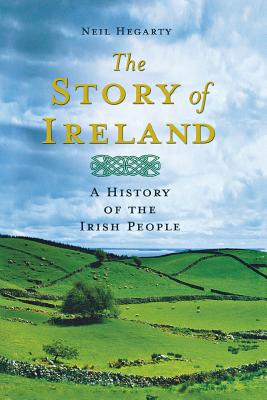 In this groundbreaking history of Ireland, Neil Hegarty presents a fresh perspective on Ireland's past. Comprehensive and engaging, The Story of Ireland is an eye-opening account of a nation that has long been shaped by forces beyond its coasts.

The Story of Ireland re-examines Irish history, challenging the accepted stories and long-held myths associated with Ireland. Transporting readers to the Ireland of the past, beginning with the first settlement in A.D. 433, this is a sweeping and compelling history of one of the world's most dynamic nations. Hegarty examines how world events, including Europe's 16th century religious wars, the French and American revolutions, and Ireland's policy of neutrality during World War II, have shaped the country over the course of its long and fascinating history. With an up-to-date afterword that details the present state of affairs in Ireland, this is an essential text for readers who are fascinated by current events, politics, and history.

Spanning Irish history from its earliest inhabitants to the country's current financial crisis, The Story of Ireland is an epic and brilliant re-telling of Ireland's history from a new point of view.

NEIL HEGARTY was born in Derry. He holds a PhD in English Literature from Trinity College Dublin. After leaving Trinity, Neil travelled and worked for a travel website before becoming a professional writer. He acted as consultant editor and contributor to several editions of the Time Out Guide to Dublin. His short fiction and essays have been published widely and his journalism has appeared in The Irish Times and Daily Telegraph.

“A prime starter kit. Author Neil Hegarty artfully encapsulates this land of saints and scholars from 433 BC to 2010.” —Boston Globe

“A most impressive sweep through the preceding centuries …An engrossing and highly readable account of the sweep of Irish history.” —The Irish Sunday Independent

“A new view of history...Everyone should read this.” —Evening Herald (UK)

“An engaging, entertaining, and accessible history...Captures the complex state of a nation.” —RTEGuide (UK)

“Hegarty's book is an admirably even-handed one, and though … it may be generations before a ‘new national memory' replaces the ingrained chronicle of repression and reprisal, we should be grateful for such an intelligent attempt to hasten it.” —Tablet (UK)