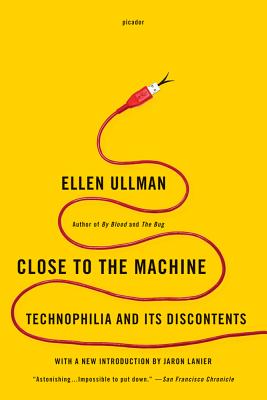 With a New Introduction by Jaron Lanier

A Salon Best Book of the Year

In 1997, the computer was still a relatively new tool---a sleek and unforgiving machine that was beyond the grasp of most users. With intimate and unflinching detail, software engineer Ellen Ullman examines the strange ecstasy of being at the forefront of the predominantly male technological revolution, and the difficulty of translating the inherent messiness of human life into artful and efficient code. Close to the Machine is an elegant and revelatory mediation on the dawn of the digital era.

Ellen Ullman wrote her first computer program in 1978. She went on to have a twenty-year career as a programmer and software engineer. Her essays and books have become landmark works describing the social, emotional, and personal effects of technology. She is the author of two novels: By Blood, a New York Times Notable Book; and The Bug, a runner-up for the PEN/Hemingway Award. Her memoir, Close to the Machine, about her life as a software engineer during the internet’s first rise, became a cult classic. She is based in San Francisco.

Jaron Lanier is a scientist, musician, and writer best known for his work in virtual reality and his advocacy of humanism and sustainable economics in a digital context. His 1980s start-up VPL Research created the first commercial VR products and introduced avatars, multi-person virtual world experiences, and prototypes of major VR applications such as surgical simulation. His books Who Owns the Future? and You Are Not a Gadget were international bestsellers, and Dawn of the New Everything was named a 2017 best book of the year by The Wall Street Journal, The Economist, and Vox.

“Close to the Machine may be the best---it's certainly the most human---book to have emerged thus far from the culture of Silicon Valley. Ullman is that rarity, a computer programmer with a poet's feeling for language.” —Laura Miller, Salon

“Fascinating…Chock-full of delicately profound insights into work, money, love, and the search for a life that matters.” —Newsweek

“Ullman comes with her tech bona fides intact (she is, after all, a seasoned software engineer). But she also comes with novel material….We see the seduction at the heart of programming: embedded in the hijinks and hieroglyphics are the esoteric mysteries of the human mind.” —Wired

“This book is a little masterpiece….I have never read anything like it.” —Andrei Codrescu

“For someone sitting so close to the machine, Ellen Ullman possesses a remarkably wide-angle perspective on the technology culture she inhabits.” —The Village Voice