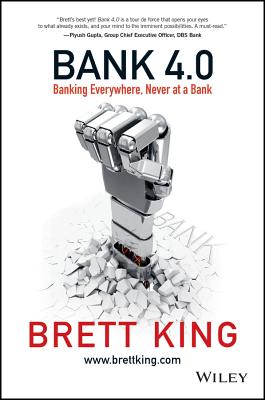 The future of banking is already here -- are you ready?

Bank 4.0 explores the radical transformation already taking place in banking, and follows it to its logical conclusion. What will banking look like in 30 years? 50 years? The world's best banks have been forced to adapt to changing consumer behaviors; regulators are rethinking friction, licensing and regulation; Fintech start-ups and tech giants are redefining how banking fits in the daily life of consumers. To survive, banks are having to develop new capabilities, new jobs and new skills. The future of banking is not just about new thinking around value stores, payment and credit utility -- it's embedded in voice-based smart assistants like Alexa and Siri and soon smart glasses which will guide you on daily spending and money decisions. The coming Bank 4.0 era is one where either your bank is embedded in your world via tech, or it no longer exists.

In this final volume in Brett King's BANK series, we explore the future of banks amidst the evolution of technology and discover a revolution already at work. From re-engineered banking systems, to selfie-pay and self-driving cars, Bank 4.0 proves that we're not on Wall Street anymore. Bank 4.0 will help you:

If you look at individual technologies or startups disrupting the space, you might miss the biggest signposts to the future and you might also miss that most of we've learned about banking the last 700 years just isn't useful.

When the biggest bank in the world isn't any of the names you'd expect, when branch networks are a burden not an asset, and when advice is the domain of Artificial Intelligence, we may very well have to start from scratch. Bank 4.0 takes you to a world where banking will be instant, smart and ubiquitous, and where you'll have to adapt faster than ever before just to survive. Welcome to the future.

Brett King is an international bestselling author, a renowned commentator and globally respected speaker on the future of business. He has spoken in over 50 countries, to more than a million people, on how technology is disrupting business, changing behavior and influencing society. He advised the Obama White House, the FED and the National Economic Council on the future of banking in the United States, and advises governments and regulators around the world. He appears regularly on US TV networks like CNBC, where he contributes on Future Tech and FinTech. King hosts Breaking Banks, the world's leading dedicated radio show and podcast on technology impact in banking and financial services (150-plus countries, 6.5 million listeners). He is also the founder of the neo-bank Moven, a globally recognized mobile start-up, which has raised over US$42 million to date, with the world's first mobile, downloadable bank account. Named "King of the Disruptors" by Banking Exchange magazine, King was voted American Banker's "Innovator of the Year," "The world's #1 Financial Services Influencer" by The Financial Brand, and was nominated by Bank Innovation as one of the top 10 "coolest brands in banking." He was shortlisted for the 2015 Advance Global Australian of the Year Award for being one of the most influential Australians living offshore.