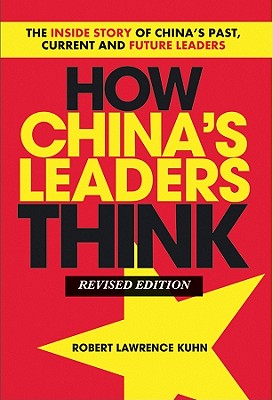 A fascinating look at China now and in the years to come, through the eyes of those at the helm

As China continues its rapid ascent, attention is turning to its leaders, who they are, and how they view the country's incredible transformation over the last thirty years. In How China's Leaders Think: The Inside Story of China's Past, Current and Future Leaders, Revised, bestselling author Lawrence Kuhn goes directly to the source, talking with members of China's ruling party and examining recently declassified Party material to provide readers with an intimate look at China's leaders and leadership structure, visionary principles, and convulsive past, and tracing the nation's reform efforts.

Focusing on President Hu Jintao's philosophies and policies, the book looks to the next generation of China's leaders to ask the questions on everyone's lips. Who are China's future leaders? How do they view China's place in the world? Confronting China's leaders head on, Kuhn asks about the county's many problem, from economic imbalances to unsustainable development, to find out if there's a road map for change. Presenting the thoughts of key Chinese leaders on everything from media, military, banking, and healthcare to film, the Internet, science and technology, and much more, the book paints an intimate, candid portrayal of how China's leaders really think.

Taking readers closer to Party officials than ever before, How China's Leaders Think documents China's thirty-year struggle toward economic and social reform, and what's to come.

Dr. Robert Lawrence Kuhn is an international corporate strategist, investment banker, and public intellectual. For over 20 years he has worked with China's senior leaders and advised the Chinese government. Dr. Kuhn also advises multinational companies on formulating and implementing China strategies, and Chinese companies in capital markets financings. The author or editor of over 25 books, Dr. Kuhn is often in the media (e.g., CNBC, Euronews, BBC, BusinessWeek, Xinhua News Agency), discussing China's politics and economy and the philosophies and policies of its senior leaders. He is senior international affairs commentator on Euronews, the leading television news network in Europe, and senior international commentator of China Central Television (CCTV News). Dr. Kuhn works with China's leaders on special projects. He is the author of The Man Who Changed China: The Life and Legacy of Jiang Zemin--the first biography of a living Chinese leader published in China and China's best-selling book of 2005. He is the author of two event-marking books: China 30 Years: A Great Transformation Of Society, which commemorates China's 30th anniversary of reform and opening up and features President Hu Jintao; and How China's Leaders Think (the first edition of this book), which commemorates China's 60th anniversary and focuses on China's new ("Fifth") generation of leaders. Dr. Kuhn has visited more than 40 cities in over 20 provinces and regions in China. He is senior advisor to CCTV and Xinhua. Dr. Kuhn is chairman of The Kuhn Foundation, which produces Closer To Truth, the public television / PBS series on science and philosophy (which Dr. Kuhn hosts)--www.closertotruth.com. He has an A.B. in human biology (John Hopkins), a Ph.D. in anatomy / brain research (UCLA) and an S.M. in management (MIT).