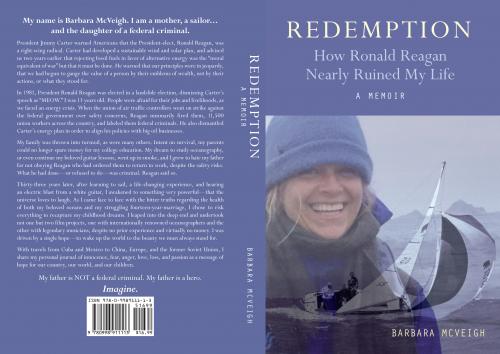 “My father is a federal criminal. My father is a hero,” Barbara McVeigh writes in her memoir Redemption, How Ronald Reagan Nearly Ruined My Life. Reagan fired her father for a union strike in 1981, leading him and 11,500 other families into years of strife. Just thirteen years old, she lost her dream to become an oceanographer, and her beloved guitar lessons, as her family struggled emotionally and financially for years. She blamed her father for "following his ego," as her grandfather had termed it, and not placing family first. Reagan's heroic public image soared as America was told how he combated the alleged threats of communism, nuclear war and the Soviet Empire. Thirty years later, Barbara marries and then takes up sailing at her late great uncle’s urging, himself a passionate and accomplished sailor, who had been her best friend, where she finds an unexpected connection to the ocean and freedom of the complexities of the modern world. When hard, bitter truths emerge about the ocean’s health and her fourteen-year marriage, Barbara packs her bags and leaves the illusory "good life." She takes the helm of not one, but two film projects, one with the world’s paramount oceanographer Dr. Sylvia Earle, and the other with renowned Brazilian guitarist José Neto. She does this with no experience and virtually no money, to reclaim her childhood dreams and, in a desperate effort, to remind the world of the awe, beauty, and truth we must always stand for. During her projects she confronts the dark shadows of Reagan’s energy, labor, health, media, and environmental policies, revealing horrific truths about America’s so-called “Hero of the Republican Party." She discovers that her father was NOT the federal criminal Reagan accused him of being. Instead, her father is a hero today. Barbara shares her very personal and painful family story of three generations and her search for truth that led her to China, Cuba, the Balkans, across Europe, and ultimately back to her own home, the San Francisco Bay. There she discovers herself, and what it means to be free in America today as our world faces political, social and environmental threats unlike any before. Barbara has a new dream and sees now that the spirits are guiding her, just as they had been, all along

Barbara McVeigh is a writer, educator, filmmaker, radio host and environmentalist. She's the mother of two children and lives in Northern California. Her one mission - to advocate respect for the natural world as we face political, social and environmental threats unlike ever before.

Barbara McVeigh is an inspiration, someone who lived during difficult times when her father, myself and 11,500 Air Traffic Controllers we’re fired for standing up for what we believed in. She relates the anger towards her father for what she thought was not thinking about the consequences the families endure during hard times. She, like my daughter, realizes now that the strike was more than a financial stunt. I highly recommend this book for everyone to read and someday they ought to use it in schools. - Amazon Review, Jeff Richey


"Redemption, a gripping memoir by Barbara McVeigh, is the best non-fiction book Ihave read in a while! Which is impressive, considering the sombre topics it deals with. Themes include our acidifying oceans, materialism,relationships, and gender inequality.

Barbara's life is in shambles. She has always dreamed of living simply, travelling the world, and giving back. Those dreams seem so distant as her husband, Ricci, clings to an extravagant house they simply cannot afford to maintain. She cannot recognize him anymore. Who is he? No, more importantly, who is she? What happened to her voice? Unsatisfied with her life, Barbara makes hard decisions to reclaim her childhood dreams, dreams she lost when Ronald Reagan fired 11, 500 air traffic controllers, including her father, back in 1981. She pours her heart and soul into making a short film about the ocean. She needs to do this, no matter the cost.

The author digs down deep and writes from her very core! She allows readers to see her from all angles. She does not conceal her faults and weaknesses. She spews out her darkest moments fervently for her readers to see, to understand her fully. This genuineness made it easy for me to connect with the author. As a result, I could see things from her eyes and understand her message better.

The format of the book was refreshingly different. The author begins with "the end", which takes up most of the book. The book closes with "the beginning". This served to emphasize the author's openness to life and created a sense of optimism for the future. The end of the book does not symbolize the end of her life, it only marks the beginning of a new chapter in her life.

I enjoyed exploring the theme of materialism most. The author argues that the rich amass so much for themselves, with no concern over the consequences. They leave so little for everyone else and harm our planet in the process. And yet, they are revered by society. We value people according to what they have and not who they are. This book convinced me that happiness does not result from material things. I was inspired as the author found happiness in simplicity, like in having her hair encrusted with salt whilst sailing.

I learned the importance of self-respect. I was appalled by the treatment Barbara accepted from others. I was even more frustrated by her referring to herself as "dumb". Going after her dreams forces her to realize her worth and she gains self-respect. Even though at times it felt like she would take one step forward and two steps back!

The only thing I felt was missing was perspective from the other characters. I felt like I was inside Barbara's head throughout the book. I wonder if this was deliberate. This is a memoir after all, a very personal one at that.

I feel everyone needs to hear the messages contained in this book. Not only did I learn from it, but I enjoyed every page of it! I rate this book 4 out of 4 stars. - OnlineBookClub.org