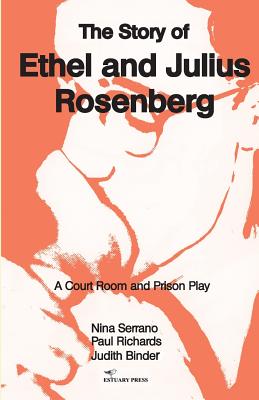 The Story of Ethel and Julius Rosenberg is a play written in 1976 by Nina Serrano, Paul Richards and Judith Binder. We originally wrote and produced it in the San Francisco Bay Area, toured it to local colleges and performed it on local media KPFA-fm and KQED-tv.

The story is about betrayal, a brother's betrayal of his sister and his brother-in-law. It is a play set in the eye of the anti-communist hurricane known to history as the McCarthy era. A play about a couple with two young children caught up in the scape-goating hysteria of a new world war, the Cold War. It is a play that follows a young couple to their deaths, clinging to their love for each other and their children, and the only truth that matters, their truth. A truth they are willing to die for, even if it means making their two small boys into orphans. It is a play about a trial that mesmerized people around the world, watching in horror as the heartless American state puts them in the electric chair and throws the switch sending them into eternity and infamy.

A Tragic Play in the Tradition of Euripides

Following the age-old format of theatrical tragedy, we created the plot. The Rosenbergs had to die for the sake of the American empire's war to destroy its socialist rival, the Soviet Union. Ethel and Julius were sacrificed to the anti-communist Gods in the same way the Iphigenia, in Euripides' tragic play, was sacrificed to the ancient gods for the sake of the patriarchal Greek State on its way to the legendary Trojan War. Only the Rosenbergs, unlike the Iphigenia, did not go quietly. They protested the injustice and proclaimed their innocence to the very end, as did their supporters worldwide.

Ethel and Julius Rosenberg were an American Jewish leftist couple caught up in the famous "atomic spies case" of the conformist 1950's. Ethel Rosenberg's brother, David Greenglass, was a pawn and victim of the anti-communist inquisition in full force in the late 1940s. He was accused of stealing materials from the Los Alamos Labs in the 1940s where he worked in New Mexico. When the Soviets exploded their first atom bomb in 1949, the charges against Greenglass escalated into stealing atomic secrets and giving them to the anti-capitalist enemy, the former Soviet Union. To escape the death sentence and save his wife and children, Greenglass falsely implicated his sister and brother-in-law, the Rosenbergs. Even though, as we all know today, there were no atomic secrets. The US government conjured up fake science hidden behind secret classified documents. This "evidence" that no one has ever seen, sent the Rosenbergs to the electric chair, leaving behind their two small boys orphaned in 1953. As a reward, David Greenglass received a reduced sentence of 10 years and his wife remained free to raise their children.

Now, decades later, new productions of the play are taking place, first, in 2016, in Bryan, Texas, and upcoming in November 2018, in Toronto, Canada. We invite theater companies everywhere to produce the play. Contact us for more information.