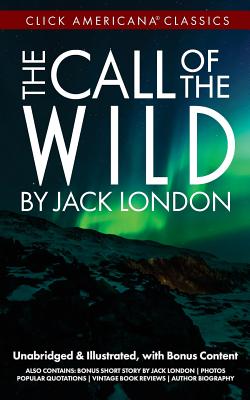 Jack London's first major work, "The Call of the Wild," changed both the face of literature and the fortunes of a young author. A tale of transformation - a domestic dog being forced by circumstance to revert to his wild state - instantly earned him great acclaim from readers and reviewers alike. Upon the book's release in 1903, noted literary critic and essayist Hamilton Wright Mabie wrote that the new little book about of a pet stolen from a comfortable home and forced to become a sled dog in the icy North was "likely to make a deep impression by reason of its power and unusual theme." As the narrative plucked heartstrings around the globe, London's work - which he gave to Macmillan Publishers for $2000 - immediately sold out its first print run, and has remained in bookstores ever since. If you've read it before, you already know what first-time readers will soon discover: "The Call of the Wild" is a story that stands the test of time. Along with the complete text, this special edition of the book contains most of the illustrations that appeared when it was originally published, as well as a selection of a dozen popular quotes, vintage book reviews from more than a century ago, bonus images, and a related short story London wrote a few years earlier - just after he returned from the frigid Yukon during the Klondike Gold Rush. Taken together, the text, images and extra historical features within these pages offer greater depth to this influential story, as well as additional insight into the mind of the writer himself.