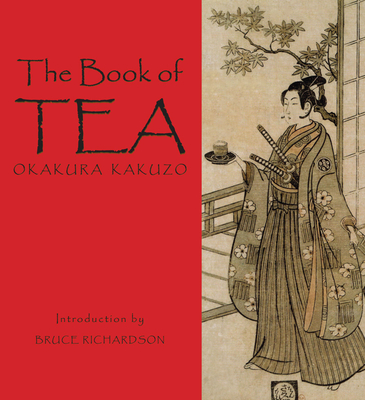 The original 1906 edition of The Book of Tea is one of the classic texts found on the desks of artists, poets, teaists and Zen Buddhists around the world.  The book has been re-designed and expanded for a contemporary audience.

You will discover the fascinating character of Okakura Kakuzo and the story of how he came to write one of the twentieth century’s most influential books on art, beauty, and simplicity—all steeped in the world’s communal cup of tea. His incredible journey took him from Yokohama to New York, Paris, Bombay, and Boston, where his life intertwined with such luminaries as Rabindranath Tagore, John Singer Sargent, Henry James, John La Farge, Isabella Stewart Gardner, Ezra Pound, and Henri Matisse. His writings influenced the work of such notable artists as Frank Lloyd Wright and Georgia O'Keeffe.

American tea writer Bruce Richardson includes many historical photographs and illustrations in this updated edition of Okakura’s classic text, along with unique insight into how Okakura's philosophy continues to inspire today’s tea culture. Plus, Richardson includes an all-new chapter on America's thirst for Japanese tea during the late 1800s, illustrated with archival photographs.

Okakura Kakuzo was born in Yokohama in 1862, just as Japan was opening its doors to the West. As a teen, he became a student at the newly-organized Tokyo University where he served as interpreter and guide for countless intellectual Americans touring his country. His incredible journey took him from Yokohama to New York, Paris, Bombay, and Boston, where his life intertwined with such luminaries as Rabindranath Tagore, John Singer Sargent, Henry James, John La Farge, Isabella Stewart Gardner, Ezra Pound, and Henri Matisse. He eventually came to Boston in 1904 to accept the position of Asian Arts director at the Museum of Fine Arts. He wrote three books – all in English. He was the spiritual advisor for Isabella Stewart Gardner and his writings influenced the work of such notable American artists as Frank Lloyd Wright and Georgia O'Keeffe.

Bruce Richardson is a tea blender and writer who has been active in America's tea renaissance for over two decades. He is the owner of Elmwood Inn Fine Teas headquartered in Danville, Kentucky. Bruce serves as Tea Master for the Boston Tea Party Ships & Museum and Contributing Editor for TeaTime and Tea Journey magazines. Bruce has authored fourteen books on tea, icluding The Great Tea Rooms of Britain, Tea & Etiquette, and The Book of Tea. He is a frequent guest speaker at tea events across the United States.

"For those of us who, for years, have loved and been influenced by Okakura's prose and philosophy, this new edition brings fresh insight and clarity to the work. With sensitivity, admiration and profound appreciation for Okakura, Bruce Richardson unravels the complex and intriguing story that lies behind the original Book of Tea. All tea lovers will treasure this beautiful and valuable work." — Jane Pettigrew, London

"I had read about Okakura and visited the Isabella Stewart Gardner Museum, but never realized the importance of the relationship between the two and how they embodied the bridge between East and West. Nor, until now, had I taken the time to read the entire book. How I wish that I had read it before I visited Japan where I learned that 'Zen is another word for tea.' The chapter titled The Cup of Humanity contains a sentence that seems ripped from today’s headlines, 'The heaven of modern humanity is indeed shattered in the Cyclopean struggle for wealth and power… Meanwhile, let us have a sip of tea.' I’m resisting the urge to swallow this book whole, and forcing myself to savor it one cup of tea at a time." — Elizabeth Knight, author of Tea with Friends