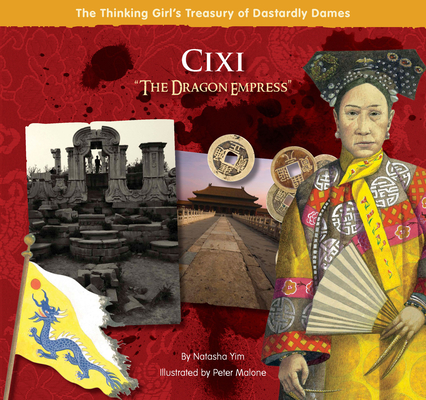 The last empress of China, Cixi fought ruthlessly to isolate her country from the West, while cloistered inside her lavish Forbidden City, ignoring the needs of her people. But was the Dragon Empress evil or just out-of-touch? Gorgeous illustrations and an intelligent, evocative story bring to life a real dastardly dame whose ignorance brought a centuries-old dynasty crashing down, ending the imperial system that had ruled China for millennia.

Natasha Yim is a children's author and an accomplished playwright. Her books include Otto's Rainy Day, published by Charlesbridge Publishing and selected as a Kids' Pick of the Lists, Cixi "The Dragon Empress" in The Thinking Girl's Treasury of Dastardly Dames, and Sacajawea of the Shoshone in the The Thinking Girl's Treasury of Real Princesses. A new picture book, Goldy Luck and the Three Pandas, is due out from Charlesbridge in 2014. Natasha has also written plays that have been staged in the U.S. and abroad. She lives in Northern California with her family. Peter Malone has illustrated over twenty children's books for such publishers as Chronicle, Knopf, Putnam, Running Press, and Scholastic. In addition to creating gorgeous illustrations, he wrote the book, Close to the Wind, about the use of the Beaufort scale for measuring wind force at sea. School Library Journal called it "informative and utterly charming." He lives in Bath, England, with his wife, a restorer of paintings, and their two grown daughters.