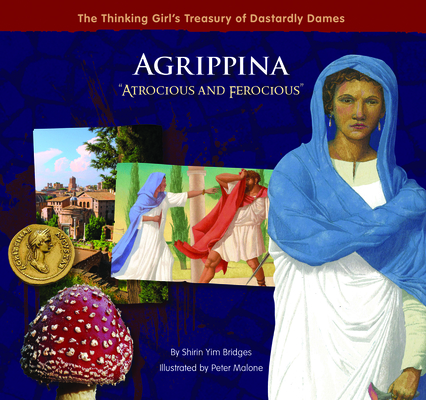 Ambitious Roman empress Agrippina murdered and married her way to the throne--and to being declared a goddess. She made many enemies, including her own son. But was she really all that atrocious? Gorgeous illustrations and an intelligent, evocative story bring to life a real dastardly dame whose lust for power lost her the love of her people, and eventually, her life.

Shirin Yim Bridges' first book, Ruby's Wish, was a Publishers Weekly Best Children's Book and won the Ezra Jack Keats award. It is on several state reading lists, has been translated into seven languages, and is now in its eleventh edition. The Umbrella Queen made TIME/CNN's Top 10 Lists and was also named a Best Children's Book by the Bank Street College of Education. Horrible Hauntings won an IRA/CBC Children's Choices Award. Mary Wrightly So Politely launched in April 2013 to starred reviews in both Kirkus and Publishers Weekly. To date, every book that Shirin has written or published has achieved national acclaim. Peter Malone has illustrated over twenty children's books for such publishers as Chronicle, Knopf, Putnam, Running Press, and Scholastic. In addition to creating gorgeous illustrations, he wrote the book, Close to the Wind, about the use of the Beaufort scale for measuring wind force at sea. School Library Journal called it "informative and utterly charming." He lives in Bath, England, with his wife, a restorer of paintings, and their two grown daughters.