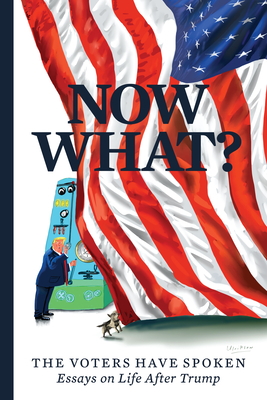 When the networks called the 2020 presidential election for Joe Biden on Saturday, November 7, 2020, people from coast to coast exhaled--and danced in the streets. This quick-turnaround volume, a collection of 38 personal essays from writers all over the country--"many of America's most thoughtful voices," as Jon Meacham puts it--captures the week Trump was voted out, a unique juncture in American life, and helps point toward a way forward to a nation less divided. An eclectic lineup of contributors--from Rosanna Arquette, Susan Bro and General Wesley Clark to Keith Olbermann, Stewart O'Nan and Anthony Scaramucci--puts a year of transition into perspective, and summons the anxieties and hopes so many have for better times ahead. As award-winning columnist Mary C. Curtis writes in the lead essay, "Saying you're not interested in politics is dangerous because, like it or not, politics is interested in you." Novelist Christopher Buckley, a former speechwriter for Vice President George H.W. Bush, laments, "The Republican Senate, with one exception, has become a stay of ovine, lickspittle quislings, degenerate descendants of such giants as Everett Dirksen, Barry Goldwater, Howard Baker and John McCain." Nero Award-winning mystery novelist Stephen Mack Jones writes, to Donald Trump, "Remember: You live in my house. 1600 Pennsylvania Avenue is my house. My ancestors built it at a cost of blood, soul and labor. I pay my taxes every year to feed you, clothe you and your family and staff and fly you around the country and the world in my tricked-out private jet. If you violate any aspect of your four-year lease--any aspect--Lord Jesus so help me, I will do everything in my power to kick yo narrow ass to the curb." As Publisher Steve Kettmann writes in the Introduction: "The hope is that in putting out these glimpses so quickly, giving them an immediacy unusual in book publishing, we can help in the mourning for all that has been lost, help in the healing (of ourselves and of our country), and help in the pained effort, like moving limbs that have gone numb from inactivity, to give new life to our democracy. We stared into the abyss, tottered on the edge, and a record-setting surge of voting and activism delivered us from the very real threat of plunging into autocracy.