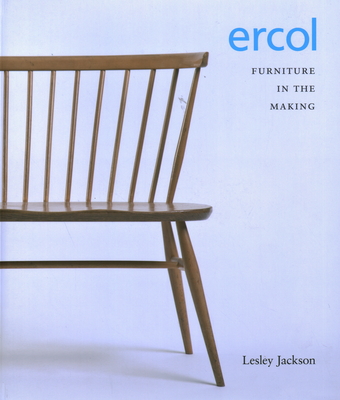 By Lesley Jackson
$35.00
Email or call for price

Ercol was founded in 1920 at High Wycombe, Buckinghamshire by Italian-born Lucian Ercolani (1888-1976), who came to Britain at the age of 10. Ercol is still going strong todand and the company is still family-owned and run. A gifted designer and an impassioned entrepreneur, Lucian Ercolani was the creative driving force behind Ercol for more than 50 years. The book focuses on the Windsor Range, his supreme creation, a coordinated collection of domestic furniture inspired by the traditional English Windsor Chair. Initally developed towards the end of the Second World War as part of the government's Utility Scheme, Ercol's Windsor Contemporary Furniture Family was launced at the Festival of Britain in 1951. A run-away success, it was expanded throughout the 1950s and 60s, encompassing a diverse array of kithcen, dining, living room and bedroom furniture in an appealing and harmonious style. Made from solid wood using a distinctive combination of beech and elm, the Windsor Range married the modern with the vernacular, combining advanced technology with superb craftsmanship. Appealing to a wide audience, including post-war design buffs, collectors, students and anyone interested in interiors, it is lavishly illustrated and attractively designed.

Lesley Jackson is an independent wrtier, curator and design historian specialising in 20th century design. Her specialist fields include furniture, textiles, glass and ceramics but her interests range across the fine and applied arts. She writes regularly for Crafts magazine and has contributed to many other newspapers and magazines, including The Guardian, The Independent, BBC Homes and Antiques, Midcentury Magazine, World of Interiors, Modernism and Apollo. She has curated major exhibitions for leading organisations, including the Wellcome Collection, the Barbican, the British Council and the Crafts Council. Lesley is particularly well-known for her research on post-war design. Her publications include: The New Look: Design in the Fifties (Thames & Hudson, 1991), 'Contemporary' Architecture and Interiors of the 1950s (Phaidon, 1994), Whitefriars Glass: The Art of James Powell & Sons (Richard Dennis, 1996), The Sixties: Decade of Design Revolution (Phaidon, 1998), 20th Century Factory Glass (Mitchell Beazley, 2000), Robin and Lucienne Day: Pioneers of Contemporary Design (Mitchell Beazley, 2001), 20th Century Pattern Design: Textile and Wallpaper Pioneers (Mitchell Beazley, 2002), From Atoms to Patterns: Crystal Structure Designs from the 1951 Festival of Britain (Richard Dennis, 2008), Shirley Craven and Hull Traders: Revolutionary Fabrics and Furntiure 1957-1960 (Antique Collectors' Club, 2009), Alastair Morton and Edinburgh Weavers: Visionary Textiles and Modern Art (V&A, 2012)