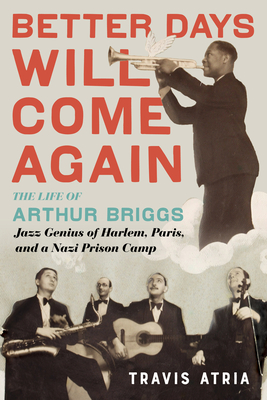 Arthur Briggs’s life was Homeric in scope. Born on the tiny island of Grenada, he set sail for Harlem during the Renaissance, then to Europe in the aftermath of World War I, where he was among the first pioneers to introduce jazz music to the world. During the legendary Jazz Age in Paris, Briggs’s trumpet provided the soundtrack while Hemingway, Fitzgerald, and the rest of the Lost Generation got drunk. By the 1930s, Briggs was considered “the Louis Armstrong of Paris,” and was the peer of the greatest names of his time, from Josephine Baker to Django Reinhardt. Even during the Great Depression, he was secure as “the greatest trumpeter in Europe.” He did not, however, heed warnings to leave Paris before it fell to the Nazis, and in 1940, he was arrested and sent to the prison camp at Saint Denis. What happened at that camp, and the role Briggs played in it, is truly unforgettable.

Better Days Will Come Again, based on groundbreaking research and including unprecedented access to Briggs’s oral memoir, is a crucial document of jazz history, a fast-paced epic, and an entirely original tale of survival.

Travis Atria is the author, with Todd Mayfield, of Traveling Soul: The Life of Curtis Mayfield. His work has appeared in Rolling Stone, Vanity Fair, Billboard, Wax Poetics, and other publications. He lives in Gainesville, Florida.

“Arthur Briggs is a name you may not know now but will never forget after reading the details of his life: from his humble beginnings in Grenada, to Harlem in its golden Renaissance, to Europe—primarily France—through most of the twentieth century. The trumpeter and bandleader became a Zelig of Paris’s jazz age—playing with, and for, some of the biggest names of the era: Louis Armstrong and Django Reinhardt, Josephine Baker and Ernest Hemingway. Music propels Briggs’s saga, and, for a black man adrift in a white world, is eventually his means of survival—playing classical music in a Nazi prison camp, and teaching music in the years after World War II. Atria’s storytelling is intimately detailed and grandly epic, tragic and triumphant, living up to its title.” —Ashley Kahn, author of A Love Supreme: The Story of John Coltrane’s Signature Album

“If you’ve never heard of Arthur Briggs, join the club. After reading Travis Atria’s intensely readable, superbly researched account, you sure as hell won’t forget him. Atria has uncovered a largely untold, often harrowing tale of jazz, race, and international politics, and he has made it into a nail-biter.” —Gary Giddins, author of Bing Crosby: Swinging on a Star and Celebrating Bird: The Triumph of Charlie Parker

“Arthur Briggs lived a king-hell epic life, as a musician and as a human being. Along with Josephine Baker, he did his part for the country that had abused them as human beings and artists. Atria’s magnificent book features a who’s who of jazz and chronicles the struggle for human dignity, set to the soundtrack of astonishing American music.” —William McKeen, author of Everybody Had an Ocean and Mile Marker Zero

"A clear picture of an extraordinary life of resilience, talent, and determination."—Kirkus Reviews

"This carefully crafted biography bears witness to the power of music and the human spirit and will inform and inspire music fans everywhere." — Library Journal

"A fascinating story and valuable reclamation of an overlooked musician."— Booklist