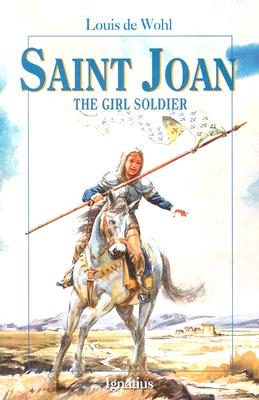 This volume in the Vision Books series of saints for youth combines a world famous Catholic novelist, Louis de Wohl, with one of the most thrilling and dramatic saint's lives in history, St. Joan of Arc. De Wohl uses his famed narrative skill to tell young people about the brave teenage French girl who had visions and led armies in battle, but also about how her entire life testifies to the amazing power of God's grace.

It's all here: how Joan, a humble maiden in an insignificant town, was told by St. Michael the Archangel, St. Catherine, and St. Margaret to lead the French in battle against the English; how she finally succeeded in convincing the French of the truth of her mission; how she met with fantastic success but was betrayed, captured, and imprisoned; and finally, how she suffered through a politically motivated trial for heresy and was burned at the stake.

Best of all, de Wohl is not interested solely in the external details of Joan's life, but in Joan's all-encompassing love for God, which informed all her courageous actions from beginning to end. You'll not only thrill to Joan's heroism; your heart will delight in her example of loving surrender to God's will. Every detail of her life will ring out to you as a joyful witness to the grace of God.

Louis de Wohl was a highly acclaimed novelist who wrote numerous best selling historical novels on lives of the saints, many being made into films. Sixteen of his books were made into films. Pope John XXIII conferred on him the title of Knight Commander of the Order of St. Gregory the Great.His works include Lay Siege to Heaven, Set All Afire, Citadel of God, The Spear, Joyful Beggar, The Quiet Light,and more.