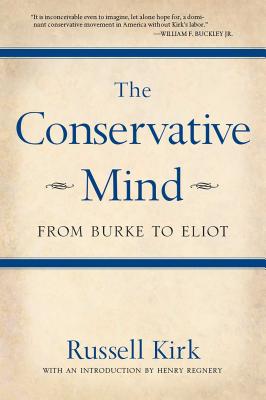 "It is inconceivable even to imagine, let alone hope for, a dominant conservative movement in America without Kirk's labor." — WILLIAM F BUCKLEY

"A profound critique of contemporary mass society, and a vivid and poetic image - not a program, an image - of how that society might better itself. [ The Conservative Mind ] is, in important respects, the twentieth century's own version of the Reflections on the Revolution in France... [Kirk] was an artist, a vsionary, almost a prophet."  - DAVID FRUM, author of Dead Right

"I have been one of your fans since the time many years ago when I read The Conservative Mind." - RICHARD NIXON

"Dr. Russell Kirk's impact on conservative thought and policy in America has been decisive. It was his writings, and in particular his seminal work, The Conservative Mind, that laid the foundation for many of the ideas that continue to shape public discourse and debate to this day." - JOHN ENGLER, former Governer of Michigan

"Kirk is assured a place of prominence in the intellectual histories for helping to define the ethical basis of conservatism. He has tried to pull conservatism away from the utilitarian premises of libertarianism, toward which conservatism often veers, toward a philosophy rooted in ethics and culture." - THE WALL STREET JOURNAL

The seventh revised edition features the complete text and an introduction by publisher Henry Regnery.

Russell Kirk (1918-1994), historian of ideas, critic, essayist, editor and novelist, was the author of thirty-two books. Among them are The Conservative Mind, The Roots of American Order, America's British Culture, The Politic of Prudence, Eliot and His Age, Enemies of the Permanent Things, Edmund Burke, Redeeming the Time, John Randolph of Roanoke, and six works of fiction. His memoirs, The Sword of Imagination, were published posthumously. He received twelve honorary doctorates from American universities and many awards, including the Presidential Citizens Medal. The Russell Kirk Center for Cultural Renewal, founded in 1995 and based in Mecosta, Michigan, continues his work to defend "the permanent things" today.