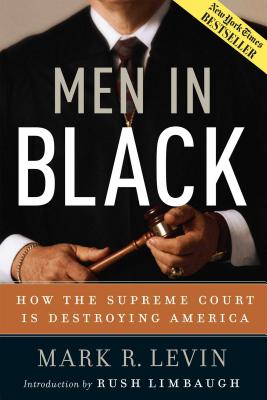 By Mark R. Levin
for information about purchasing this book, please contact orders@bookpassage.com

“One of the finest books on the Constitution and the judiciary I’ve read in a long time….There is no better source for understanding and grasping the seriousness of this issue.” - Edwin Meese III

“The Supreme Court has broken through the firewalls constructed by the framers to limit judicial power.”

“America’s founding fathers had a clear and profound vision for what they wanted our federal government to be,” says constitutional scholar Mark R. Levin in his explosive book, Men in Black. “But today, our out-of-control Supreme Court imperiously strikes down laws and imposes new ones to suit its own liberal whims––robbing us of our basic freedoms and the values on which our country was founded.”

Levin writes: “Barely one hundred justices have served on the United States Supreme Court. They’re unelected, they’re virtually unaccountable, they’re largely unknown to most Americans, and they serve for life…in many ways the justices are more powerful than members of Congress and the president.… As few as five justices can and do dictate economic, cultural, criminal, and security policy for the entire nation.”

In Men in Black, you will learn:

Mark R. Levin is one of America’s preeminent conservative commentators and constitutional lawyers. He is the president of Landmark Legal Foundation, host of a number-one rated talk radio program on WABC in New York City, and a contributing editor for National Review Online. Levin also served as a top adviser to several members of President Ronald Reagan’s Cabinet, including chief of staff to Attorney General Edwin Meese. He is the host of syndicated radio show The Mark Levin Show, as well as Life, Liberty & Levin on Fox News.