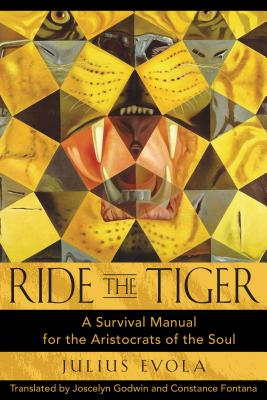 Julius Evola’s final major work, which examines the prototype of the human being who can give absolute meaning to his or her life in a world of dissolution

• Presents a powerful criticism of the idols, structures, theories, and illusions of our modern age

• Reveals how to transform destructive processes into inner liberation

The organizations and institutions that, in a traditional civilization and society, would have allowed an individual to realize himself completely, to defend the principal values he recognizes as his own, and to structure his life in a clear and unambiguous way, no longer exist in the contemporary world. Everything that has come to predominate in the modern world is the direct antithesis of the world of Tradition, in which a society is ruled by principles that transcend the merely human and transitory.

Ride the Tiger presents an implacable criticism of the idols, structures, theories, and illusions of our dissolute age examined in the light of the inner teachings of indestructible Tradition. Evola identifies the type of human capable of “riding the tiger,” who may transform destructive processes into inner liberation. He offers hope for those who wish to reembrace Traditionalism.

A controversial philosopher and critic of modern Western civilization, Julius Evola (1898-1974) wrote widely on Eastern religions, alchemy, sexuality, politics, and mythology. Inner Traditions has published his Eros and the Mysteries of Love: The Metaphysics of Sex, The Yoga of Power, The Hermetic Tradition, Revolt Against the Modern World, The Mystery of the Grail and Ride The Tiger.

Joscelyn Godwin was born in Kelmscott, Oxfordshire, England on January 16, 1945. He was educated as a chorister at Christ Church Cathedral School, Oxford, then at Radley College (Music Scholar), and Magdalene College, Cambridge (Music Scholar; B.A., 1965, Mus. B., 1966, M.A. 1969). Coming to the USA in 1966, he did graduate work in Musicology at Cornell University (Ph. D., 1969; dissertation: "The Music of Henry Cowell") and taught at Cleveland State University for two years before joining the Colgate University Music Department in 1971. He has taught at Colgate ever since.

“Evola is one of the most interesting minds of the [world] war generation.”
— Mircea Eliade, author of The Sacred and the Profane

"One of the most difficult and ambiguous figures in modern esotericism."
— Richard Smoley, in Parabola

"Evola looks beyond man-made systems to the eternal principles in creation and human society. The truth, as he sees it, is so totally at odds with the present way of thinking that is shocks the modern mind."
— John Mitchell, author of The New View Over Atlantis

"It is one of Evola's greatest merits that he combines a prodigious wealth of erudite detail with the gift of isolating from their local conditioning ideas or disciplines that are of value to us."
— Marguerite Yourcenar, author of Memoirs of Hadrian

"Evola rises above the usual dichotomies of left and right, liberal and conservative, challenging us to reconnect our lives and our institutions to the timeless spiritual standard that guided our ancestors."
— Glenn A. Magee, author of Hegel and the Hermetic Tradition

"Ride the Tiger offers a practical view of how to be truly awakened in a dark age."
— Robert Burns, New Dawn, Sept-Oct 2005

". . . this is an important work for an intellectual history of the twentieth century. . ."
— The Journal of Esoterica, July 2006

“A dazzling and interesting, but very dangerous author . . .”
— Hermann Hesse, author of Siddhartha

"Simply put, Evola shows, unintentionally but with passion, why European Tradition may not be able to match East Asia in riding the tiger in today's world. It lacks a spirituality for today's mundane world, tempered by the harsh realism of Daoism and the practical disciplines of Confucianism."
— Reg Little, New Dawn, No. 121, Jul/Aug 2010