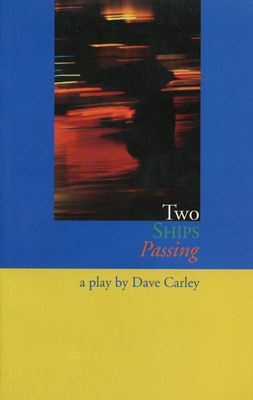 Two Ships Passing is the sequel to Dave Carley's Midnight Madness, which received its world premiere in 1988, and went on to become one of Canada's most widely produced plays.

In the decade since their encounter in Midnight Madness, Anna and Wesley's lives have changed considerably: Anna has recently been appointed to the bench and Wesley has become a minister. Anna's son, Jason, thirteen when we last saw him in Midnight Madness, is now a university graduate - in business administration. The trio's political views have diverged over the years and the once sexually repressed Wesley has even managed to develop a few sexual peccadilos.

Set against the public background of Ontario under Mike Harris's Common Sense Revolution and the private background of personal successes and failures, Two Ships Passing provides theatre-goer and play-reader alike with the lively and witty intellectual debate normally associated with Shaw.

Dave Carley's previous plays include A View from the Roof, Into, and Writing With Our Feet, which was nominated for the Governor General's Literary Award in 1992. He is the Senior Script Editor at CBC Radio Drama and is currently at work on another play, an adaptation of Timothy Findley's Headhunter.