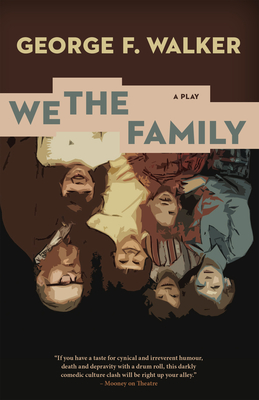 Canada's master playwright applies his trademark black humour and incredibly crisp dialogue to the family and multiculturalism. We the Family follows the ripple effects within two culturally and racially divergent families when their children wed. We the Family 's list of characters reads like an ethnic joke, which, indeed, it is, at least in part: the son of the main characters, David and Lizzie Kaplan, a Jewish-Irish Catholic mixed marriage, marries the daughter of Jenny Lee, a Chinese Canadian widow. There's also a Russian mistress, a Palestinian lover, and a glamorous, possibly fraudulent Italian psychologist, while offstage Pakistani terrorists kidnap the also-offstage honeymooning couple, then sell them to Sicilian gangsters who sell them to Russian gangsters, one of whom turns out to be the father of the Russian mistress (another family). By the end of the play, Walker has deconstructed the dysfunctional Kaplan and Lee families and family love as well. Through the play's pervading treachery, with family members and lovers betraying each other in horrifying ways, he satirizes the hypocrisy of expounding family values while behaving in viciously selfish and self-centred ways. These hyphenated Canadians certainly aren't "nice," and no amount of "sweet-and-sour matzah balls" (which the Kaplan matriarch serves at the multicultural wedding reception) can hide the nasty taste.

George F. Walker has been one of Canada's most prolific and popular playwrights since his career in theater began in the early 1970s. His first play, The Prince of Naples, premiered in 1972 at the newly opened Factory Theatre, a company that continues to produce his work. Since that time, he has written more than twenty plays and has created screenplays for several award-winning Canadian television series. Part Kafka, part Lewis Carroll, Walker's distinctive, gritty, fast-paced comedies satirize the selfishness, greed, and aggression of contemporary urban culture. Among his best-known plays are Gossip (1977); Zastrozzi, the Master of Discipline (1977); Criminals in Love (1984); Better Living (1986); Nothing Sacred (1988); Love and Anger (1989); Escape from Happiness (1991); Suburban Motel (1997, a series of six plays set in the same motel room); and Heaven (2000). Since the early 1980s, he has directed most of the premieres of his own plays. Many of Walker's plays have been presented across Canada and in more than five hundred productions internationally; they have been translated into French, German, Hebrew, Turkish, Polish, and Czechoslovakian. During a ten-year absence, he mainly wrote for television, including the television series Due South, The Newsroom, This Is Wonderland, and The Line, as well as for the film Niagara Motel (based on three plays from his Suburban Motel series). Walker returned to the theater with And So It Goes (2010). Awards and honours include Member of the Order of Canada (2005); National Theatre School Gascon-Thomas Award (2002); two Governor General's Literary Awards for Drama (for Criminals in Love and Nothing Sacred); five Dora Mavor Moore Awards; and eight Chalmers Canadian Play Awards.