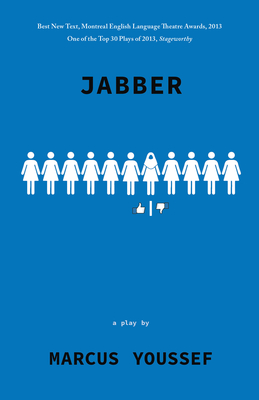 Like many outgoing young women, Fatima feels rebellious against parents she sees as strict. It just so happens that she is Egyptian-born and wears a hijab. When anti-Muslim graffiti appears on the walls of her school, Fatima transfers to a new school. The guidance counsellor there, Mr. E., does his best to help Fatima fit in, but despite his advice she starts an unlikely friendship with Jorah, who has a reputation for anger issues. Maybe, just maybe, Fatima and Jorah start to, like, like each other ... As their mutual attraction grows, the lines Fatima and Jorah cross as they grow closer become the subject of an intense exploration of boundaries - personal boundaries, cultural boundaries, and inherited religious and political boundaries. Fatima and Jorah discover that appearances matter; they've been exposed for their whole lives to images that begin to colour their relationship: images of the Middle East, the working class, and how teenage boys and teenage girls behave. Put all these reactive factors together in the social laboratory that is a high school and observe: is there a solution for Fatima and Jorah? High school, like no other social space, throws together people of all histories and backgrounds, and young people must decide what they believe in and how far they are willing to go to defend their beliefs. Inside a veritable pressure cooker, they negotiate cross-cultural respect and mutual understanding. Jabber does its part to challenge appearances - and the judgments people make based on those appearances.

Writer and performer Marcus Youssef is the associate artistic producer at Vancouver's NeWorld Theatre. A graduate of both the National Theatre School (Acting, 1992) and the University of British Columbia (M.F.A., 2002), Youssef is a regular contributor of drama, commentary, and documentary to numerous programs on the CBC network. He also writes regularly for publications such as Vancouver Magazine, Georgia Straight, Ricepaper, and This Magazine. For many years, Youssef has also dedicated himself to numerous community-based advocacy programs that aim at using writing and/or theater as a tool for procuring political and social change. He co-founded CRANK Magazine with Matt Hern and Rich Lawley as well as the Reclaiming Project--a nationally recognized, immigrant-centered oral history program--with Mercedes Baines. __________________________________________ Dennis Foon is a Detroit-born playwright, novelist, producer, and screenwriter. He was the founder and artistic director, from 1974 to 1986, of Vancouver's Green Thumb Theatre, a company that soon evolved into a cutting edge theatre with an award-winning repertory of plays about the reality of young people and the dilemmas they face. It was with Green Thumb that Foon began to synthesize his early experiences as a child and teen in Detroit. Since leaving Green Thumb in 1987 to devote his energies to his own projects, he continued to direct plays and turned his attention to screenwriting, including the 1995 film Little Criminals, which was acclaimed worldwide.