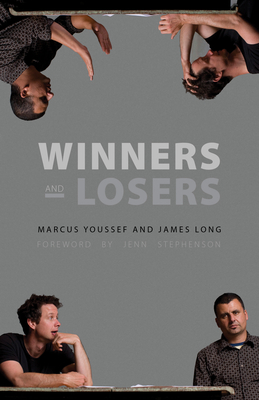 Two friends pass the time together playing a made-up game in which they name people, places, or things and debate whether they are successful or not; in other words, whether they are winners or losers. Each friend seeks to defeat the other, and because one of these men grew up economically privileged and the other did not, the competition very quickly heats up. Marcus Youssef is associate artistic producer at Vancouver's NeWorld Theatre and teaches theater at Concordia University in Montreal.James Long has been making theater since 1995 and is artistic director of Theatre Replacement in Vancouver.
.

Writer and performer Marcus Youssef is the associate artistic producer at Vancouver's NeWorld Theatre, though he is currently teaching in the theater department at Concordia University in Montreal. A graduate of both the National Theatre School (Acting, 1992) and the University of British Columbia (M.F.A., 2002), Youssef is a regular contributor of drama, commentary, and documentary to numerous programs on the CBC network. He also writes regularly for publications such as Vancouver Magazine, Georgia Straight, Ricepaper, and This Magazine. For many years, Youssef has also dedicated himself to numerous community-based advocacy programs that aim at using writing and/or theater as a tool for procuring political and social change. He co-founded CRANK Magazine with Matt Hern and Rich Lawley as well as the Reclaiming Project - a nationally recognized, immigrant-centered oral history program - with Mercedes Baines. James Long has been making theatre since 1995 and artistic directs Theatre Replacement with Maiko Bae Yamamoto. He has also taught workshops and classes to established artists across Canada and to students at the University of British Columbia, University of Regina, Simon Fraser University, Studio 58, and Seattle's Cornish College of the Arts. As a freelance actor and director, he has had the pleasure of working with Rumble Productions, Neworld Theatre, Cindy Mochizuki, urban ink, Leaky Heaven Circus, The Chop, The Only Animal, Stan's Cafe, CBC Radio, and Electric Company Theatre, among many others. He is a graduate of Simon Fraser University.