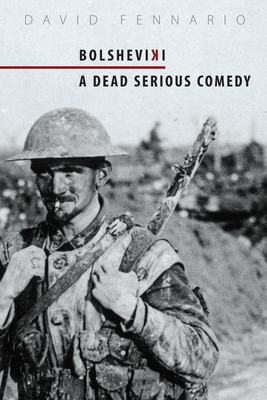 By David Fennario
$16.95
Email or call for price

Set in a hotel bar in Montreal on Remembrance Day, Bolsheviki has World War I veteran Harry "Rosie" Rollins telling young reporter Jerry Nines about his experience in the trenches. Rollins recalls men pissing their pants, losing limbs and planning a revolt against their officers. The character of Rosie Rollins is based on World War I veteran Harry "Rosie" Rowbottom, who was wounded at Vimy Ridge. Fennario taped an interview with Rowbottom in 1979 in the old "King Eddy" Hotel in Toronto over a bottle of Bushmills whiskey.

Rosie's meandering monologue delivers a blistering de-glorification of war as it shifts back and forth between his wartime recollections and the present. The veteran's clattering, fast-paced description of life--and death--on the Western Front reproduces the chaotic sounds and rhythm of battle. This cutting-edge drama, profoundly in opposition to conventional histories of Canadian troops in World War I, debunks every sentimental notion of duty, heroism and nationhood. "Birth of Nation" they called it on TV but I didn't see nobody getting born just a lot of people dying so we could sit there on top of another shit hole of mud with Captain Rutherford still pushing for that DSO or the MC or the MCB or the YMCA with Triangles--just give him a medal will ya? Cast of 1 man.

David FennarioAnglophone playwright born David Wiper in Montreal, Quebec, 1947. He was raised in the working class district of Pointe-St-Charles, an area he would make the centre of most of his plays. He was one of six children, his father was a housepainter. His pen name, given to him by a girlfriend, was part of a Bob Dylan song, "Pretty Peggy-O." David Fennario has described his life as: Born on the Avenues in the Verdun-Pointe Saint Charles working-class district of Montreal; one of six kids growing up in Duplessis' Quebec, repressed, depressed, oppressed and compressed. "School was a drag. My working experience turned me into a raving Red calling for world revolution. The process of becoming a political activist gave me the confidence to be a writer. Up to then, I thought only middle-class people could become artists, because they were not stupid like working-class people, who were working-class because they were stupid. But reading Socialist literature convinced me that working-class people can change themselves and the world around them. We are not chained to fate, Freud, God, gender or a genetic code. We can make ourselves into what we want. I've been trying my best to do that ever since, and have had some success as a playwright and a prose writer."